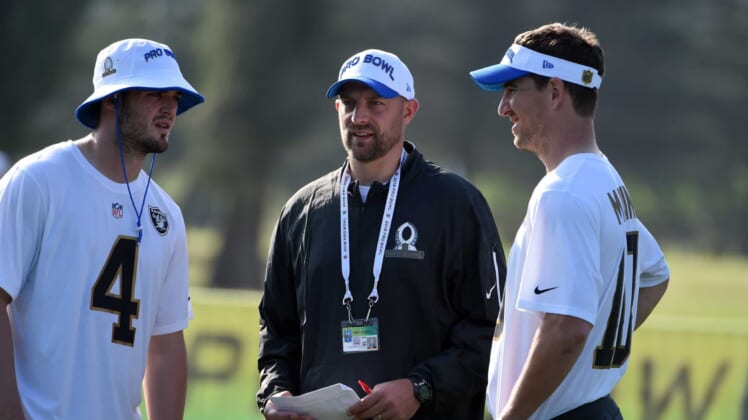 The Chicago Bears haven’t done a heck of a lot right since firing Lovie Smith and replacing him with Marc Trestman, but they finally hit a home run hiring Matt Nagy.

The former offensive coordinator of the Kansas City Chiefs is a former quarterback and longtime pupil of Andy Reid. He’s an offensive-minded coach who is nothing like John Fox and he’s going to have an immediate, positive impact on the Bears.

The happiest person in the Chicago organization should be young quarterback Mitch Trubisky. He slogged through a dismal rookie campaign in which John Fox’s influence and a lack of receiving talent doomed him to failure, though he did show signs of being the real deal. Now he’ll be tutored by the man who worked wonders with Alex Smith — a former No. 1 overall pick who had his most productive seasons as a pro the past two years with Nagy as his offensive coordinator.

Trubisky and Smith share many similar traits, and I have no doubt we’ll see a huge upswing in production for the young quarterback in his second year. Especially in light of the fact that Nagy will be his own playcaller.

The similarities don’t stop there, either, between the Chiefs and Bears. For one, Chicago has a couple of offensive weapons that somewhat mirror what Nagy had in Kansas City.

Tarik Cohen (the human joystick) may not be quite as fast as Tyreek Hill, but he’s not much slower if he is and actually has much more wiggle in the open field. Nagy is going to have a ton of fun getting this youngster involved in the passing game, much like he did with Hill, Deanthony Thomas and Kareem Hunt.

Obviously Jordan Howard is going to be a huge part of what they do offensively, too. But he’s more of a bell-cow back than a specialist. Still, he’s extremely valuable and should get a ton of work next year.

Young tight end Adam Shaheen — a somewhat forgotten figure in his rookie year due to coaching and injuries — should thrive in Nagy’s offense. It’s too early to say he’s going to have a Travis Kelce-type influence on the offense as a whole, but this is a very talented young player who combines size and athleticism and was thought of highly enough to be drafted No. 45 overall last April.

Granted, Chicago has plenty more work to do building the roster around these young players. The receiving corps needs serious work. The offensive line needs an upgrade, too. But at least the Bears have a solid core. They also have plenty of cap space to make some key moves in free agency and will be able to add a blue-chip product picking early in the draft.

Hiring Nagy is just what the doctor ordered for the Bears. No doubt he’s thrilled to have some of the most exciting young talent in the league to mold. He’d be smart to convince defensive coordinator Vic Fangio to stay on, because there aren’t many in the NFL who can work magic on that side of the ball like Fangio does.

We cannot wait to see what happens next in the Windy City. The future is bright, indeed.