Will Marc Trestman Become the Next Victim of Jay Cutler’s Potential?

On Sunday night Bears quarterback Jay Cutler delivered, if not the single worst statistical performance of his maddeningly inconsistent nine-year career, something that could certainly rival any of his worst.

Stats alone, as we all know, rarely tell the whole tale.

Cutler’s numbers against the Packers weren’t good, but they weren’t anywhere near poor enough on their own to adequately explain the abject futility displayed by this Chicago team, playing a division rival on the road in front of a national audience.

Regardless of how he performs, or doesn’t perform, there’s just something about Cutler’s presence that feels like failure—maybe it’s all the failing he does.

Even the 55-14 final score, a blowout so lopsided that it resulted in season low ratings for Sunday Night Football, suggests the game was closer than it really was.

Aaron Rodgers delighted the home crowd at Lambeau Field, throwing six touchdowns in the first two quarters, giving the Packers a 42-0 lead at halftime. Without a concerted effort to lay off the gas in the second half, and even slam on the breaks at times, that number could have easily been much worse.

Coach Mike McCarthy benched most of his starters early in the third, forcing the Bears to then suffer the indignity of being overmatched by the Packers’ second string the rest of the way. But short of implementing a situational mercy rule, which wouldn’t have spared anyone’s dignity anyway, it was all he could do.

On the other side of the field was an overmatched Marc Trestman, who still doesn’t seem to have any answers in his second season at the helm in Chicago. The performance of his team last night, not to mention in weeks prior, makes you wonder if he even understands the questions at this point. 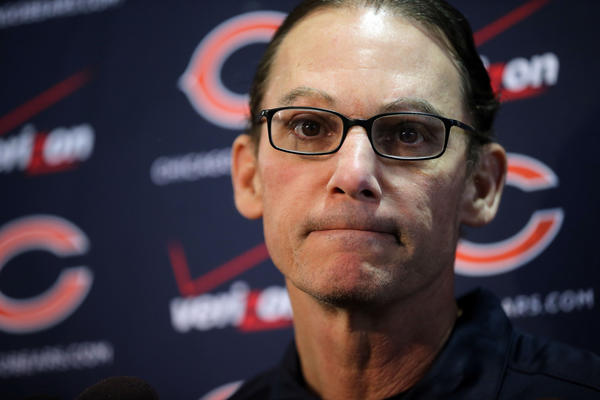 On Monday Steve Rosenbloom of the Chicago Tribune asked: ‘Why wasn’t Marc Trestman fired at halftime?’

And he was very serious.

Rosenbloom doesn’t just want Trestman fired, he wants a pound of flesh on behalf of Bears fans everywhere to boot. And who can blame him? They’ve been jerked around so long by a laughably and inexcusably inept organization that pink slips alone won’t cut it—public shaming needs to be part of the equation too.

USC really set the standard with their dramatic dismissal of the unapologetically loathsome Lane Kiffin last year. After a disappointing 3-2 start and a blowout loss to a Pac-12 opponent on the road, Kiffin was fired at the Trojans’ private terminal at LAX. He was not allowed to board the team bus and was forced to find his own transportation home.

Talk about setting an unrealistic standard for retribution terminations.

Rosenbloom makes a compelling case against Trestman, not that the #FireTrestman Twitter mob needs much convincing. Coaches are largely disposable in the NFL today, lasting three or four seasons on average, primarily because they’re exceptionally convenient scapegoats for franchises with longstanding systemic problems.

Firing a coach is a superficial move made often to appease fans, who desperately want to believe success is just one piece away. It’s the go-to move for ownership that is either too lazy or too inept to properly address personnel problems. Replacing a coach is easier than replacing a quarterback, but there’s no potential hire out there that is going to make Jay Cutler better at his job.

This isn’t about his performance against the Packers on Sunday night—there were plenty of other Bears on that field not doing their jobs either. This isn’t about any single game or even single-season performance in his career. This is about Cutler being discussed, evaluated and paid for almost a decade based on little more than potential.

What could be. What should be. Never what is.

Culter isn’t, most importantly, a winner.

In eight complete seasons, three with the Broncos and five with the Bears, Cutler has led his team to the playoffs just once in 2010. He got the only postseason win of his career knocking off the Seahawks in the divisional round before being defeated at home by the wildcard Packers, who went on to win Super Bowl XLV.

For years the discussion has centered around putting the pieces in place that would unlock Cutler’s fabled potential. Brandon Marshall and Alshon Jeffery are as talented a 1-2 punch as any wide receiving tandem in the league and Matt Forte has been the under-appreciated cornerstone of the Bears offense since 2008.

Cutler went through three offensive coordinators in his first four years in Chicago and may have, yet another, new head coach before the season ends—the fifth of his career, if you count Josh McDaniels in Denver, who wanted nothing to do with Cutler or his potential.

It doesn’t matter what changed around Cutler over the years—players, coaches, coordinators, schemes—nothing seemed to work. Perhaps that’s why the organization, fresh out of good ideas to solve the problem, decided to throw a ton of money at it instead. Because that always works.

Last January Cutler, who was set to become an unrestricted free agent in the offseason, was signed to a seven-year contract extension worth $126 million, $54 million of which is guaranteed. Two years longer, but with the same amount of guaranteed money, than the extension Aaron Rodgers signed with the Packers in 2013.

That is essentially the central story in the career of Cutler, who has shown an amazing propensity for failing upward. He accomplished exactly nothing with the Bears in five years, something that usually hurts quarterbacks in free agency, yet was rewarded with a massive raise and excessively long extension just hours into the offseason.

Drafting and developing a quarterback is a labor-intensive process that fails more often than it succeeds. A daunting enough undertaking that the Bears would rather just spend the next seven years digging around for Cutler’s potential instead. Even if it’s been largely proven non-existent.

So what if Cutler has a big arm? If throwing a football 80 yards from a recliner with a lit cigarette hanging from your lips while looking impressively disinterested won football games in the NFL, then the search would be over, Culter would be your man. Looking bored and losing games is his wheelhouse.

Jay Cutler is truly the Peyton Manning of not giving a s**t.

Seriously though, since when do we judge a 31-year-old man on his potential anyway? Since when do we pay him based on potential and not performance? Particularly in the NFL, where the average career spans less than four seasons and most players who do stick around are considered washed up by the age of 30.

The Bears can fire as many coaches and coordinators as they want, but that won’t change Cutler. He’s not going to wake up one morning and become more passionate or more accurate or engaging or anything else that would come close to justifying the size of his bloated bank account.

In addition to Aaron Rodgers, Tom Brady and Peyton Manning are among the many quarterbacks in the league who make less in base salary than Jay Cutler in 2014.

Of course, it’s already too late for Chicago, whose ill-advised extension has put the Bears all-in on Cutler through 2015. The only saving grace being that the contract is front-loaded with guaranteed money, meaning it will only cost them $6 million in dead cap space over three years to kick him to the curb after next season—something they’ll surely be compelled to do after finally coming to terms with something that’s been glaringly apparently for years.

The stark reality is that being terrible under Cutler, an as yet unproven commodity who will be 32 next April, isn’t any better than being terrible under an unproven (and cheaper) rookie, who at the very least has the hope of being the franchise’s longterm answer at the quarterback position. 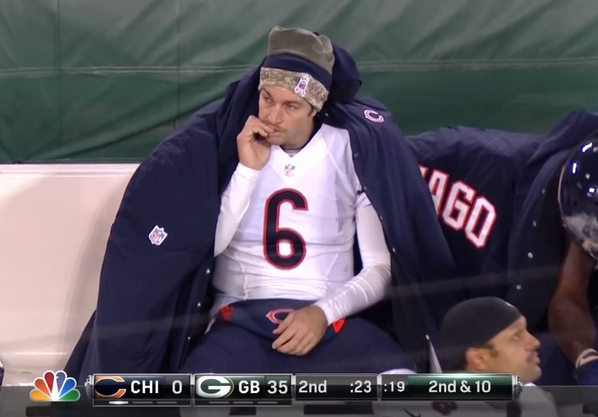 And then there’s the starkest reality of all: Jay Cutler is, unfortunately, just Jay Cutler.