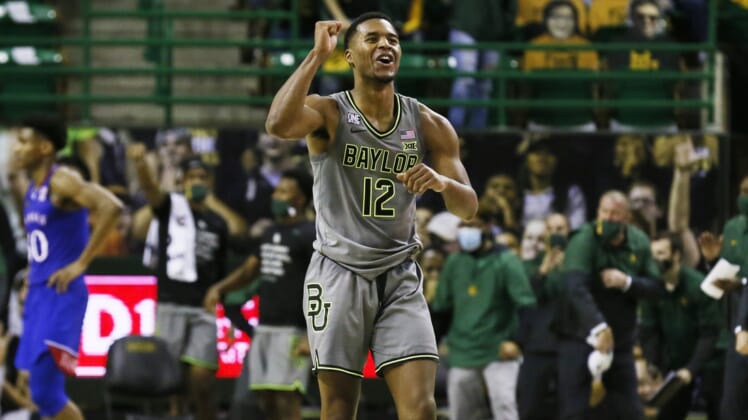 Jan 18, 2021; Waco, Texas, USA; Baylor Bears guard Jared Butler (12) reacts to a made basket in the closing moments of the game against the Kansas Jayhawks during the second half at Ferrell Center. Mandatory Credit: Raymond Carlin III-USA TODAY Sports

Take them one game at a time.

If it’s not on the first page of the coaches’ book of cliches, it’s likely on page two or three.

Yet for Scott Drew, the coach of No. 2 Baylor, it probably sums up why the Bears have become the equal of, if not in some ways better than, longtime Big 12 Conference power Kansas.

“Just focus in on what we can control and not get too hyped,” Drew said Monday night after Baylor led wire-to-wire in dumping the visiting Jayhawks 77-69.

That will have to be the Bears’ mantra Saturday when they try to remain unbeaten as they visit dangerous Oklahoma State for another Big 12 test.

Baylor (13-0, 6-0 Big 12) is one of four remaining unbeaten teams in Division I that have played at least 13 games, but the only one to win every game by at least eight points. And only a half-court shot at the buzzer pulled Kansas within single digits.

The Bears were better across the board, establishing a 16-point lead in the first half and then turning away a handful of Kansas runs in the second half. When the Jayhawks pulled within 65-60 with 3:18 remaining, Baylor promptly put the game to bed when Jared Butler stroked a 3-pointer and MaCio Teague converted a 3-point play.

Butler was his usual explosive self against Kansas, finishing with a game-high 30 points. He’s averaging 23.2 in five career matchups against the Jayhawks.

“Whenever we play Kansas, it’s supposed to be a big game, and I love those big games and moments,” Butler said.

Meanwhile, Oklahoma State (9-3, 3-3) has been idle since Jan. 12, a 75-70 home win over Kansas. The Cowboys’ last two games against Oklahoma and at West Virginia were postponed after they logged positive COVID-19 tests in their program.

“The well-being of the young men in our program has always been and will continue to be the most important thing to me, my staff and our administration,” Oklahoma State coach Mike Boynton said.

Cunningham has lived up to the considerable hype in what’s likely his only season in Stillwater. He’s averaging 17.8 points, 6.2 rebounds and 3.8 assists per game, doing nothing to dissuade thoughts he could be the No. 1 overall pick in the 2021 NBA Draft.

Isaac Likekele is contributing 12.1 points and a team-high 7.8 boards in support of Cunningham. Oklahoma State enters the game averaging 77.1 points and canning 45.8 percent from the field.