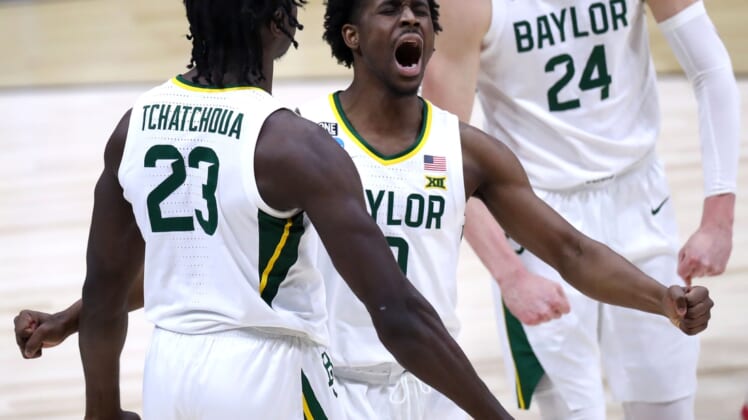 Baylor Bears forward Jonathan Tchamwa Tchatchoua (23) and Baylor Bears guard Adam Flagler (10) celebrate after sinking a basket while being fouled by Arkansas during the Elite Eight round of the 2021 NCAA Tournament on Monday, March 29, 2021, at Lucas Oil Stadium in Indianapolis, Ind. Mandatory Credit: Mykal McEldowney/IndyStar via USA TODAY Sports

Having walked the long road back from purgatory, a punishment related to improprieties that preceded his time at Baylor, Bears coach Scott Drew earned the right to relish the moment.

Baylor, by virtue of an 81-72 victory over Arkansas in the South Regional final on Monday, secured its first Final Four berth in 71 years. Drew has been at the helm of the program over the past 18 seasons and has experienced his share of ups and downs during that extended tenure.

The Bears rose from the ashes of a horrific scandal, reaching the brink of the Final Four in 2010 and 2012 only to fall to the eventual national champion on both occasions. They regressed a bit before rebounding last season only to have a global pandemic snuff that promising campaign.

Nothing blocked the Bears from glory this time around, and on Saturday, top-seeded Baylor (26-2) will face another former Southwest Conference rival in the second-seeded Houston Cougars (28-3) at Lucas Oil Stadium in Indianapolis in the first national semifinal of the NCAA Tournament.

“Been to two Elite Eights before and seen Duke celebrate and then win a national championship, Kentucky celebrate and then win a national championship,” Drew said. “And it’s nice that these guys were able to celebrate, especially after last year when we were on the verge of having the first No. 1 seed in school history and not having a chance to compete in the NCAA Tournament.”

This team, led by a trio of dynamic and veteran guards, would not be denied when opportunity knocked a second time. The Bears started this season 18-0, lost momentum when their season was placed on pause and recovered in time to reclaim their stride in the NCAA Tournament.

Against Arkansas, the Bears raced to a commanding lead but had to hold on down the stretch. It was the latest trial by fire for a program and a collection of players accustomed to adversity.

“We’ve been in the fire before. It’s not our first time in the fire,” Teague said. “We’ve just got to continue to compete at a high level.”

The Cougars will certainly command an exceptional effort from Baylor. Houston has won 11 consecutive games and, like the Bears, is in the throes of a historic run this postseason.

Houston last qualified for the Final Four in 1984 when it completed its third consecutive trip on the back of the famed “Phi Slama Jama” collection of superstar talent. The program fell into disrepair over the subsequent two decades, and by the time Kelvin Sampson took over seven years ago, the Cougars were equal parts neglected and irrelevant, a far cry from past glory.

And, like Baylor, veterans have paved the way back for the Cougars to national prominence.

“I thought we could win (at Houston),” Sampson said. “We had to get through the first year. That was important because then we could start building. The wins were all pluses that first year, the losses meant nothing. I probably cost us a couple games trying to discipline kids.

Senior guard DeJon Jarreau (10.8 points, 5.5 rebounds, 4.4 assists) is a two-way marvel whose offensive orchestration is matched by his defensive wizardry, with the latter anchoring wins over Syracuse and Oregon State by stifling volume scorers Buddy Boeheim and Ethan Thompson.

Senior forward Justin Gorham (8.5 points, 8.7 rebounds) has produced a team-high eight double-doubles and is the fulcrum of a team that ranks third nationally with just under 15 offensive rebounds per game. Junior guard Quentin Grimes, the American Athletic Conference Co-Player of the Year, averages 18 points and 5.8 rebounds to lead an offense that isn’t prolific but is efficient.

But the Cougars’ bread is buttered on the glass and defensively, where they lead the nation in field-goal percentage defense (37.3). And if Houston is to claim the first meeting between Texas programs at the Final Four, it will do so by sticking to the script that authored this revival.

“I’m grateful to be around this group and have coach Sampson leading us,” Jarreau said. “I’m happy he’s my coach, I’m happy I came back and the story is still being written. We’re in the Final Four now.”