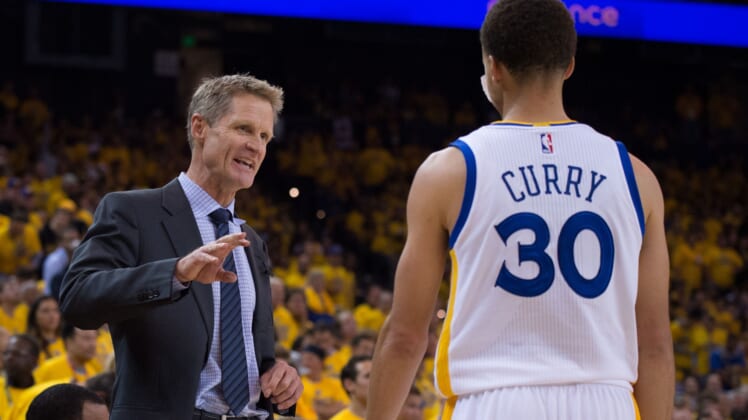 The Golden State Warriors lost their first playoff game in six attempts Tuesday night against the Memphis Grizzlies. That loss didn’t only tie the series up at one, it gave the Grizzlies home-court advantage heading back to Memphis for the next two games.

It was the Warriors first loss in Oakland since a January 27th overtime defeat against the Chicago Bulls.

Despite this recent setback, officials in Oakland and San Francisco are already planning a championship parade. They are doing so even before the Warriors have made it to as much as the conference finals (via SF Gate).

According to a source, (Libby) Schaaf (Oakland’s mayor) has already talked to San Francisco mayor Ed Lee about what a parade would look like. One idea might be to begin the march in Oakland and then put the team on a barge to San Francisco.

The specifics of a potential championship parade would have to be worked out well in advance, especially if the parade takes part in two cities—starting in Oakland and then moving on to San Francisco.

There’s also a lot politicking involved here. The Warriors have played in Oakland for the past 44 years after moving from San Francisco. They are also in the midst of planning a relocation back to San Francisco with plans of a waterfront arena already in the works. How does Oakland feel about that?

All this aside, the fact that plans for a parade have been made public has to be seen as a tad premature. For a team that has not won a title since the 1975 season, the Warriors don’t need anything to jinx them this year.

If Golden State does get past the Grizzlies (far from a foregone conclusion), it would then take on either the Houston Rockets or Los Angeles Clippers in the Western Conference Finals before a potential matchup with the East’s best in the NBA Finals. There’s a lot of basketball left. Too much to be planning a championship parade.