A World Series showdown between the Tampa Bay Rays and the Los Angeles Dodgers kicks off in Arlington, Texas. 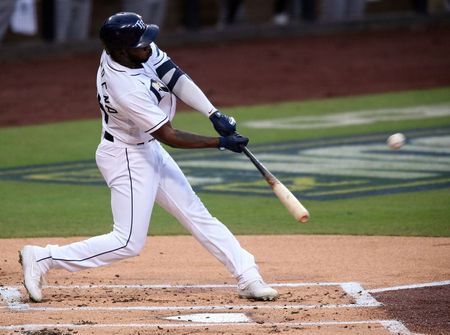 (Reuters) – A Major League Baseball (MLB) season that once appeared doomed by COVID-19 approaches the finish line on Tuesday, as a World Series showdown between the Tampa Bay Rays and the Los Angeles Dodgers kicks off in Arlington, Texas.

Only about a quarter of the 48,000-capacity Globe Life Park will be open to ticket holders due to the ongoing pandemic that has claimed more than 200,000 lives in the United States. The ballpark is the first neutral site since 1944 to host the best-of-seven Fall Classic.

The novel coronavirus put Opening Day on hold for months and threatened to derail the truncated season when it finally opened in July, as positive tests among players and personnel forced numerous postponements and put Commissioner Rob Manfred on the defensive over the league’s safety provisions.

The Rays, who overcame a 4-6 start to the regular season, clinched their first pennant in more than a decade in a seven-game saga against the Houston Astros, and will look to rely on the firepower of slugger Randy Arozarena, who led his team in scoring with 14 runs in the playoffs, including seven home runs, a rookie postseason record.

“I’m very happy with this team and this organization and the group of guys that I have,” said Arozarena via a translator in a televised interview after claiming his American League Championship Series MVP prize.

“I’m extremely grateful,” said Rays catcher Mike Zunino, who had four homers in the postseason, including a Game 7 blast. “It hasn’t been the easiest road to this point.”

Tampa, which went 40-20 in the regular season, will look to seize its first-ever World Series title against the Dodgers, who boast six championship titles and have now claimed three National League pennants in the last four years.

The manager of the 43-17 Dodgers, Dave Roberts, said in a televised interview that the World Series berth was “really satisfying.”

“As far as our guys, we had our backs against the wall,” he said after his team’s NLCS Game 7 victory. “We stuck together, and found a way to win three in a row. Huge series.”