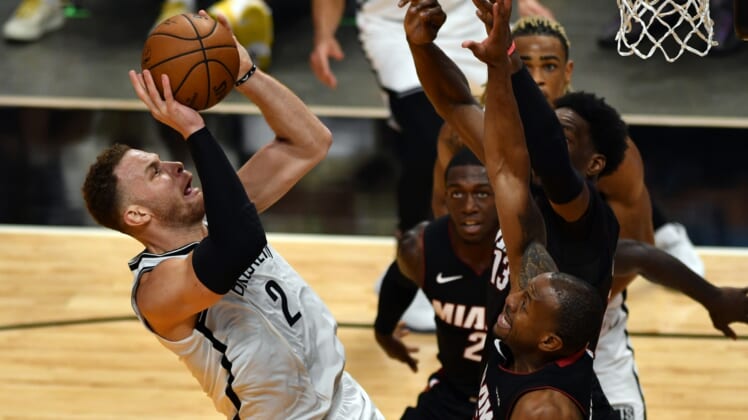 Bam Adebayo’s step-back 14-foot jumper from the baseline at the buzzer lifted the Miami Heat to a 109-107 victory at home against the Brooklyn Nets in a matchup of shorthanded teams on Sunday afternoon.

Adebayo finished with 21 points, 15 rebounds and five assists to help the Heat snap a three-game losing streak despite playing without Jimmy Butler, who sat out with a sprained right ankle.

Landry Shamet scored a career-high 30 points and made 7-of-12 3-pointers to lead the Nets, who lost Kevin Durant early to injury.

Durant scored the Nets’ first eight points before exiting the game with 7:57 left in the first quarter with what was diagnosed as a left thigh contusion. Durant banged his left knee against Heat forward Trevor Ariza’s knee on a drive to the basket.

Shamet’s output and Kyrie Irving’s 20 points and nine assists was nearly enough for the Nets, who were already without James Harden (hamstring) for the sixth consecutive game. Joe Harris scored 12 points.

But after Goran Dragic’s coast-to-coast layup tied the game at 107 with 43.6 seconds left, Irving missed a go-ahead 3-point attempt from the top of the key with 24.3 seconds remaining with Adebayo defending him.

Adebayo then held the ball at the other end and dribbled into the paint with two seconds left and fired up his winning shot.

Dragic finished with 18 points, eight rebounds and seven assists and Dewayne Dedmon totaled 10 points and 10 rebounds off Miami’s bench. Kendrick Nunn made five of the Heat’s 16 triples and finished with 17 points while Ariza had 15 points and nine rebounds. Duncan Robinson scored 11 points.

Durant, a 11-time All-Star, returned to the Nets’ lineup April 7 after a 23-game absence due to a hamstring injury. He played in four of Brooklyn’s previous five games and averaged 23.8 points, 6.3 assists and 5.3 rebounds during that span.

Heat coach Erik Spoelstra said pregame that Butler was day-to-day. It’s unclear if he will be able to play Monday night when Miami hosts the Houston Rockets.