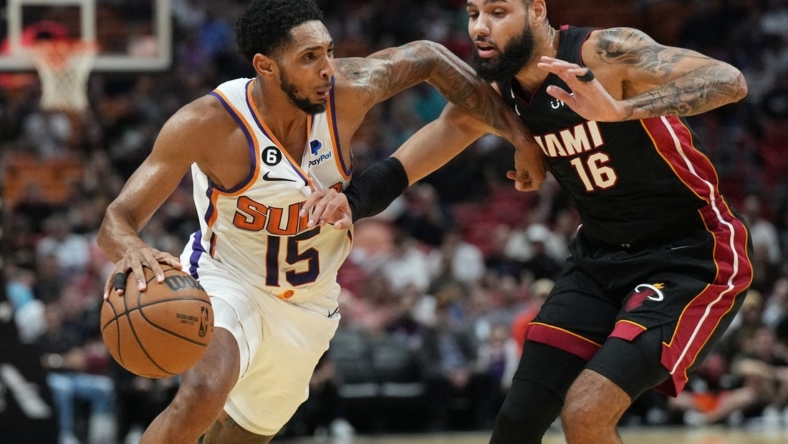 Bam Adebayo scored 14 of his season-high 30 points in the fourth quarter, helping the host Miami Heat rally to a 113-112 win over the Phoenix Suns on Monday night.

Devin Booker, who led the Suns with 25 points, missed two potentially game-winning shots in the final 6.2 seconds. On the first one, Booker’s mid-range jumper was blocked by Jimmy Butler. Booker retrieved the ball and missed a desperation turnaround 3-pointer at the buzzer to end the game.

Adebayo scored the game’s final points on free throws with 35 seconds left. The Suns’ Cameron Payne then missed a drive, and Deandre Ayton got the offensive rebound, setting up the final sequence with Booker.

Ayton had a double-double with 16 points and 12 rebounds.

Butler produced a double-double for the second time in three games, posting 16 points and 13 rebounds.

Max Strus, who scored 31 points in Miami’s previous game, was held scoreless through three quarters, missing all five of his shots. He finished with five points.

Miami raced to a 10-2 lead and never trailed in the first quarter. Both teams shot over 54 percent from the floor and at least 70 percent on 3-pointers in a first quarter that, by the end of it, had Miami on top, 35-31.

Phoenix cut its deficit to 58-57 at halftime. Washington had a huge second quarter with 13 points on 5-for-7 shooting, including 3-of-4 on 3-pointers.

Ayton had eight points — on 4-for-4 shooting — and five rebounds in a strong third quarter as Phoenix surged on top, 91-84. Phoenix outshot Miami in the third quarter, 55.6 percent to 40.9 percent.