Wide receiver Rashod Bateman, the Baltimore Ravens’ first-round selection in the NFL Draft, signed a contract with the team Wednesday, with multiple outlets reporting it was worth $12.6 million over four years.

Bateman, the No. 27 overall selection out of Minnesota, was the first of two opening-round selections by the team. Penn State defensive end Odafe Oweh was selected with the No. 31 overall pick that came from a trade with the Kansas City Chiefs. 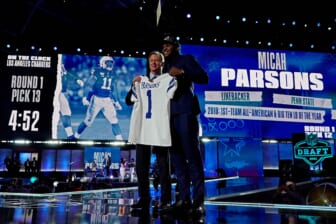 In five games this past season, Bateman caught 36 passes for Minnesota for 472 yards and two touchdowns. In three seasons with the Golden Gophers, he caught 147 passes in 31 games for 2,395 yards and 19 TDs.

The Ravens added three wide receivers in the offseason. In addition to Bateman, they also drafted wide out Tylan Wallace out of Oklahoma State in the fourth round (131st overall) and signed free agent Sammy Watkins.