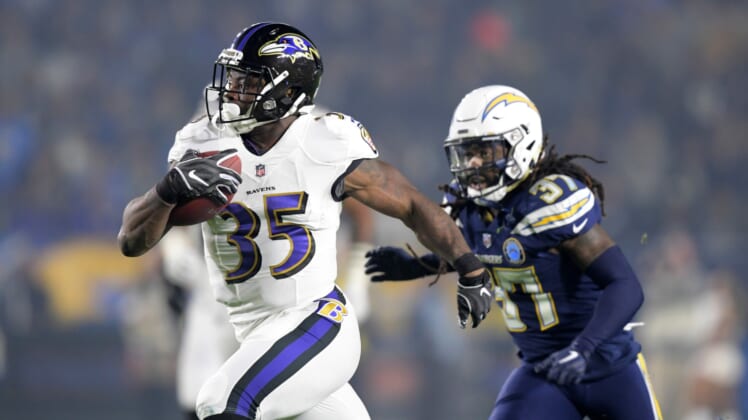 Last season, the Baltimore Ravens made NFL history with a record-breaking performance. One of their stars, Gus Edwards, thinks they can do it again.

Ravens committed to the run, can ‘make history’ again in 2020

In Week 17 of the 2019 season, the Ravens rushed for 223 yards against the Pittsburgh Steelers. That total put the team up to 3,296 rushing yards on the 16-game season — setting a new NFL record.

Speaking about the upcoming season, Edwards shared that the Ravens are “committed” to the run and said he’s “excited” for another chance to make history.

“I think [offensive coordinator Greg] Roman is committed to it, it seems like [head coach John] Harbaugh is committed to it,” Edwards said, via the team’s website. “That’s the first step. We’ll see where it goes. I’m excited. It’s a chance to make history.”

Baltimore certainly has the players to make it happen. The Ravens went out and drafted former Ohio State star running back J.K. Dobbins in the second round. He joins Edwards, veteran star Mark Ingram, and second-year burner Justice Hill.

During the 2019 season, quarterback Lamar Jackson gained more than a third of the team’s total rushing yards. In a record-setting performance, the unanimous MVP broke Michael Vick’s single-season record rushing for 1,206 yards with seven touchdowns.

If the Ravens are going to break their own NFL record this coming season, they may do it a whole lot differently. Jackson has hinted he’ll do a lot less running in 2020, which may be the reason why Dobbins was selected in Round 2.

Interestingly, if Jackson were to take another step of evolution as a passer, it might help the run game even more. Last year he was extremely dangerous as a passer, tossing 36 touchdowns. But if he can consistently threaten defenses with more yards through the air, then the run game will open up for the team’s backs.