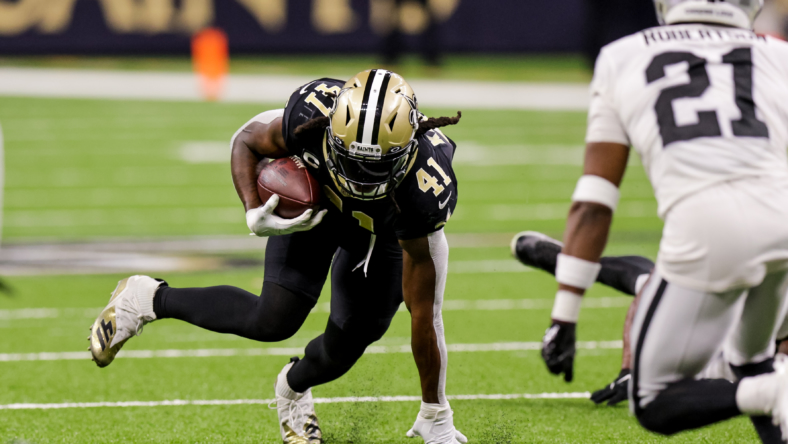 The first-place Baltimore Ravens travel to the Bayou to take on the New Orleans Saints on Monday night in the final game of the NFL Week 9 slate.

This is an absolutely huge matchup for both teams. Baltimore finds itself just a half game ahead of the Cincinnati Bengals in the AFC North and will be without top pass-catchers Mark Andrews as well as Rashod Bateman in this one.

As for the Saints, they sit at 3-5 on the season. Head coach Dennis Allen finds himself under a microscope. A win here and New Orleans will be part of a three-way tie atop the NFC South A loss and it will be closer to the cellar than first place. Below, we check in on five players to watch for this “Monday Night Football” contest.

Isaiah Likely stepping into a starring role for the Baltimore Ravens

A star during his time at Coastal Carolina, Likely stood out big time during the preseason after Baltimore made him a fourth-round pick this past April. However, he didn’t see a ton of action until Mark Andrews started dealing with injuries. In fact, Likely played all of seven offensive snaps in a Week 7 win over the Cleveland Browns.

That changed last week when Andrews went down with a shoulder injury last week. Likely caught 6-of-7 targets for 77 yards and a touchdown while playing 51 snaps on offense. For the Ravens, this loomed large in a win over the Tampa Bay Buccaneers.

“We’re really excited about the guys stepping up. It’s all about the opportunity. Don’t think for a second that these guys won’t step up and take advantage of that opportunity that’s in front of them,” Baltimore Ravens offensive coordinator Greg Roman.

With Andrews and Bateman (season-ending injury) out in this one, we can expect Likely to see an uptick in targets from Lamar Jackson. He’ll be going up against a Saints defense that has yielded a mere 28 receptions to tight ends in eight games. It won’t be an easy task for the rookie.

If New Orleans is going to get back into the playoff conversation, this 35-year-old veteran must prove Allen right in naming him the starter over a higher-upside Jameis Winston. Dalton’s role is to manage the game and avoid turnovers.

Back in Week 7, the multi-time Pro Bowler didn’t do that. He threw two pick-sixes late in the second quarter against the Arizona Cardinals, pretty much ending any hope the Saints had for a road win. Then, last week against the Las Vegas Raiders, Dalton completed 22-of-30 passes with two touchdowns and zero interceptions. It’s not a coincidence that New Orleans shut out Vegas by the score of 24-0.

Now that the Saints’ defense has started to perform better after some major struggles earlier in the season, a mistake-free game from Dalton could lead to a win and a first-place tie. If that doesn’t happen, New Orleans will be facing an uphill climb.

With Michael Thomas now lost for the season, Chris Olave takes over as the obvious No. 1 receiving target in New Orleans. The rookie No. 11 pick has more than lived up to the expectations that came with that billing, recording 37 receptions for 547 yards in seven games.

In the midst of another Pro Bowl-caliber season, Humphrey will now be tasked with going up against the youngster. He’s performed well at a micro level (75.4 QB rating allowed, two interceptions). But the Ravens’ late-game meltdowns on defense defined the early portion of their schedule.

“That was just frustration amongst some of the guys,” Humphrey said following a Week 6 loss to the New York Giants. “We were all talking like, ‘Man, we kind of keep doing the same thing at the end of games. Not finishing games.'”

Baltimore became the first team in NFL history to hold a double-digit lead in each of its first six games without boasting a winning record after that span. Now winners of two consecutive, the onus is on the back end of the Ravens’ defense to do their thing. Humphrey will play the biggest role in going up against Olave Monday night.

Alvin Kamara’s time to shine for the New Orleans Saints

We’ve heard Dennis Allen talk about it on a never-ending loop. The idea for this iteration of New Orleans’ offense is to win the time of possession battle with a consistently good rushing attack. That’s one of the reasons Dalton is getting the call to start over Winston in what their histories show the former to be less mistake-prone.

However, this only works if the Saints’ rushing attack does its thing. The team heads into Monday night ranked in the top 10 of the NFL in yards per carry and rushing yards per game. Kamara is the primary reason for this. The five-time Pro Bowler is currently on pace for what would be a career-high 1,032 rushing yards and is averaging 4.3 yards per tote. In addition to his ability in the passing game, Kamara must do his thing on the ground for New Orleans to pull off a home upset.

Lamar Jackson must dominate for the Baltimore Ravens

Injuries have impacted Baltimore’s offense in a big way. In addition to Andrews and Bateman being sidelined, running backs J.K. Dobbins and Gus Edwards will not go in this one. Clearly an NFL MVP candidate heading into Week 9, Jackson must continue to get water from a rock here.

He did that in last week’s win over the Buccaneers, completing 27-of-38 passes for 238 yards while adding 43 yards on the ground. Back in Week 7, Jackson completed just nine passes in a win over Cleveland. He needs to perform more at the level we saw against Tampa if the Ravens are going to avoid a 5-4 start to the season and a road upset in the Bayou.