Aug 28, 2021; Landover, Maryland, USA; Baltimore Ravens running back J.K. Dobbins (27) is consoled by Ravens safety Chuck Clark (36) while being placed on a cart after being injured against the Washington Football Team in the first quarter at FedExField. Mandatory Credit: Geoff Burke-USA TODAY Sports

Baltimore second-year running back J.K. Dobbins was carted to the locker room with an apparent left knee injury in the Ravens’ final preseason game Saturday night against the Washington Football Team.

Dobbins suffered the injury on the opening drive. Baltimore’s starting RB was sandwiched after catching a screen pass. His left leg appeared to get bent backward. He wasn’t able to put any pressure on it and needed help to the sideline.

He was ruled out for the rest of the game.

Dobbins rushed for 805 yards and nine touchdowns in 15 games (one start) as a rookie. He also caught 18 passes for 120 yards out of the backfield. He averaged 6.0 yards per carry, the second-highest by a rookie over the past 20 seasons, according to ESPN. The Saints’ Alvin Kamara averaged 6.1 in his rookie season in 2017.

Gus Edwards is Baltimore’s No. 2 running back. 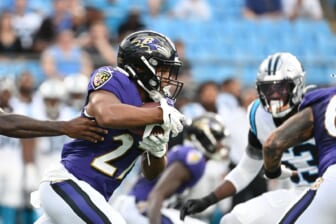