The 2016 NFL season is just around the corner. As such, Sportsnaut will be previewing all 32 teams before the games begin in September. Continuing the series, we continue with the AFC North to visit the Baltimore Ravens — a team that’s coming off an injury-plagued 2015 campaign and is relying on veterans to improve in 2016.

1. Can the veteran-laden core hold up for the season?

The likes of Joe Flacco, Justin Forsett, Steve Smith and Terrell Suggs missed a combined 37 games a season ago. That’s not a sustainable situation for even the most-elite teams out there. Now take into account Baltimore’s somewhat small margin for error, and this is magnified even further.

Not only do the Ravens need to keep their core players healthy, said players must perform at high levels in order for this squad to compete in the AFC North.

Flacco can’t finish the 2016 season with the same splits we saw last year, throwing just two more touchdowns than interceptions. Forsett must find a way to average more yards per rush and show a higher level of consistency.

Meanwhile, Smith has to prove that he’s not washed up. The 37-year-old receiver is coming off a torn Achilles, which could very well limit the impact he has in 2016.

If all this happens, the Ravens might end up surprising the football world in what should be a highly competitive AFC North this season.

2. Will Joe Flacco get a consistent running game? 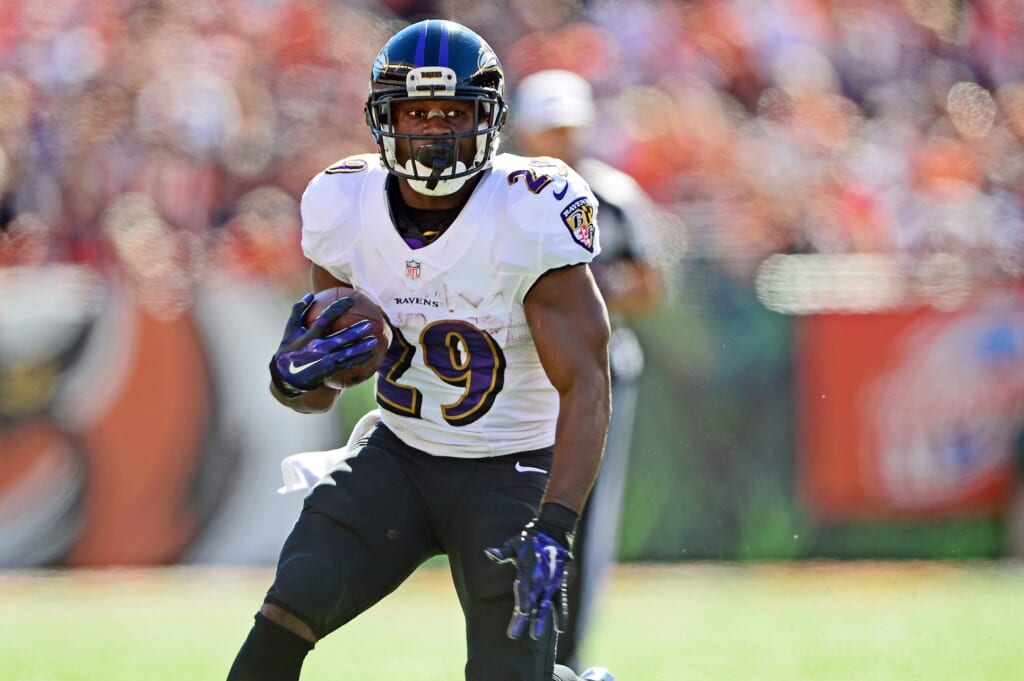 It goes without saying that most quarterbacks in the NFL succeed at a much higher chip when they have solid rushing attacks. This is obviously the case with Flacco.

Joe Flacco has had much more success the past two seasons when the Ravens rush for 100+ yards pic.twitter.com/W8wHL8slke

This isn’t an indication that Flacco simply wants to hand the ball off when the running game is going well. Instead, it’s all about balance. In fact, he’s still averaging 30 passes attempt when the rushing attack hits 100-plus yards.

Coming off an injury-plagued 2015 season that saw him miss six games, it appears that Justin Forsett is once against slated to be Baltimore’s primary ball carrier. He’ll be joined by second-year running back Buck Allen and promising rookie Kenneth Dixon. Whichever way you spin it, this unit needs to come up big for the Ravens in 2016.

3. How much does Eric Weddle have left in the tank?

We already know about the drama that surrounded Weddle’s departure from the San Diego Chargers. He wanted a long-term deal, but the team’s belief that the three-time Pro Bowler regressed prevented this.

Now asked to shoulder the load as the Ravens’ best cover guy in the secondary, this free safety must prove to be worth the big bucks Baltimore gave him.

After failing to put up an interception for the first time in his career and yielding a 95.6 quarterback rating a season ago, that might be asking a bit too much.

We look at Forsett’s career and cannot be terribly impressed. Here’s a guy that’s reached the 650-yard plateau just once in his eight-year NFL career. He’s also attempted 152-plus rush attempts once during this span.

At 30 years old and coming off a serious injury, it’s going to be difficult for Forsett to come close to the 1,266-yard performance we saw in 2014.

Enter into the equation a rookie running back in Kenneth Dixon, who has everything you look for in a three-down back.

“Highly determined runner with a strong desire to compete through the whistle on every snap. Dixon possesses outstanding feet with exciting suddenness in his change of direction, but hes very willing to finish his runs with authority and has a knack for finding the end zone,” NFL Media’s Lance Zierlein wrote about Dixon before the draft. “Dixon has all the traits of being a quality, three­-down starter in the NFL.”

Coming off a tremendous career at Louisiana Tech that saw him record over 3,200 total yards and 54 touchdowns in his final two seasons, Dixon is primed to surprise folks in the NFL.

In reality, he could steal the starting job from his veteran counterpart early in the season. This would set into motion a highly productive rookie season — potentially helping create the balance Flacco needs on offense.

There’s absolutely no doubting the talent on this roster. It’s also hard to doubt John Harbaugh as a head coach. Here’s a guy that led Baltimore to the playoffs in six of his first seven seasons as its head coach, earning a Super Bowl title in the process.

One really does have to wonder if last year was an outlier of sorts. No team in the NFL could have overcome the injuries we saw in Baltimore last year and still found a way to succeed at a high clip.

Flacco has proven to be a winner. Steve Smith continues to amaze us at his advanced age. Baltimore’s front seven is still something opposing offenses can’t take for granted. And the team’s secondary looks to be vastly improved from a season ago.

Injuries and Joe Flacco. We talked about Flacco being a winner. But what do quarterback wins even mean? Sure he’s won 62 percent of his starts in the NFL. The former first-round pick has also failed to put up more than 27 touchdowns or as much as 4,000 yards in a single season.

Stats and wins. They might be a way for us to dumb down more complicated aspects of the game. However, we also know that Flacco needs help from the running game to succeed.

He’s not going to be the reason your squad reaches that next level. He’s not Peyton Manning. He’s not Tom Brady. He’s not elite.

If Baltimore finds itself in a situation where injuries continue to mount, Flacco simply won’t be able to put the team in his shoulders. That has to be the biggest concern heading into the 2016 season.