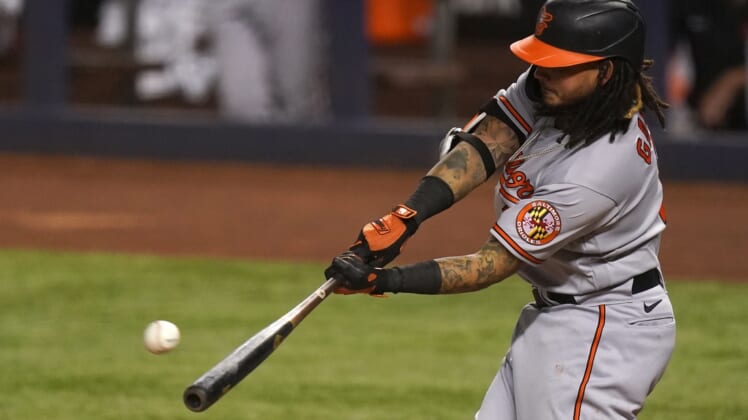 Matt Harvey earned his first win in almost two years, leading the Baltimore Orioles to a 7-5 victory over the host Miami Marlins on Tuesday night.

Harvey (1-1) allowed eight hits and three runs in five innings, winning for the first time since July 13, 2019, when he was pitching for the Los Angeles Angels. He struck out four without issuing a walk.

Cesar Valdez got four outs — including three by strikeout — for his fourth save of the season. He fanned pitcher Pablo Lopez for the final out of the game as Miami was out of position players to use as a pinch hitter.

The Orioles, 3-8 against Miami since 2015, got two RBIs each from Freddy Galvis and Rio Ruiz. Galvis and Trey Mancini homered for Baltimore.

Miami was led by Miguel Rojas, who went 4-for-4 with two runs, a triple, a walk and an RBI.

Both teams sustained an injury in the game.

Orioles right fielder Anthony Santander twisted his left ankle going back to first base on a first-inning pickoff try. He was replaced by Austin Hays, who was activated earlier Tuesday after being out due to a strained right hamstring.

The Marlins lost catcher Jorge Alfaro to a left hamstring injury in the fourth. He was replaced by Chad Wallach.

Baltimore opened the scoring with three runs in the first. Maikel Franco’s slow roller became an RBI groundout, and Ruiz pulled a two-run double down the right field line.

Miami cut its deficit to 3-1 in the bottom of the first. Rojas tripled to the right field corner and scored on Adam Duvall’s single. The Marlins nearly got more, but Brian Anderson’s shot to right was tracked down by Hays, who make a running catch just before bumping the wall.

The Orioles stretched their lead to 5-1 on a pair of solo homers by Mancini and Galvis in the third inning.

Baltimore made it 6-1 in the fourth as Hays hit a two-out single and scored when DJ Stewart doubled off the bottom of the wall in left-center.

In the eighth, Ruiz doubled before he appeared to be picked off second base. However, Wallach threw the ball into center field, and Ruiz advanced to third before scoring on Galvis’ RBI single for a 7-5 lead.