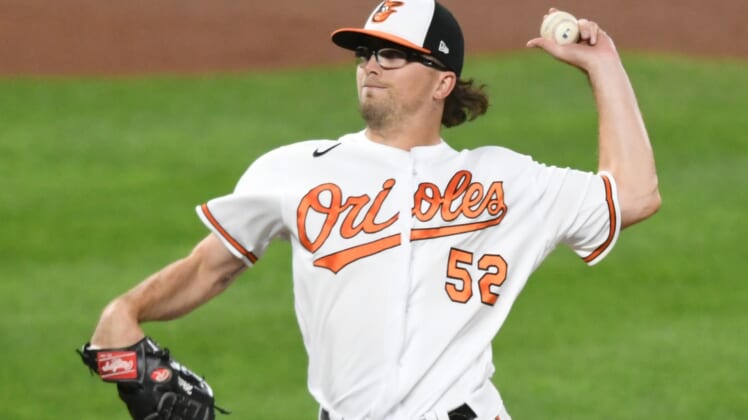 Orioles rookie Alex Wells pitched six innings of one-run ball and the Boston Red Sox missed another chance to move closer to an AL wild-card berth in a 6-2 loss at Baltimore on Thursday night.

Wells (2-3) allowed three hits while throwing 52 of his 80 pitches for strikes against Boston, which entered Thursday holding the second wild-card spot with a half-game lead on Seattle and a one-game lead on Toronto.

Tyler Nevin singled in a pair of runs and Pat Valaika added a sacrifice fly during a three-run sixth for Baltimore, which won its final home series while handing Boston its fifth loss in six games.

That run support was enough for Wells, who recovered from Enrique Hernandez’s 19th home run in the first inning to pitch his longest big-league outing and record his first win since his second career appearance on June 29.

Joey Krehbiel allowed a run in the seventh, Dillon Tate worked a scoreless eighth and Cole Sulser followed with a clean ninth to seal the AL-worst Orioles’ second series win in September.

Baltimore finishes the season at wild-card contender Toronto while Boston concludes with a three-game interleague set in Washington.

Pivetta struck out eight while allowing four hits and two walks. He threw 52 of 87 pitches for strikes and retired his first six batters before walking Nevin and allowing a single to Valaika to lead off the third.

Pivetta nearly escaped after he fanned both Jahmai Jones and Cedric Mullins looking. But with two outs, Mountcastle ambushed a first-pitch fastball, driving it into the Orioles’ bullpen in left-center to give Baltimore the lead.

Boston did not put another runner in scoring position until the seventh, when J.D. Martinez eventually scored on Krehbiel’s wild pitch. With a runner on third, Jose Iglesias lined out to end the threat.