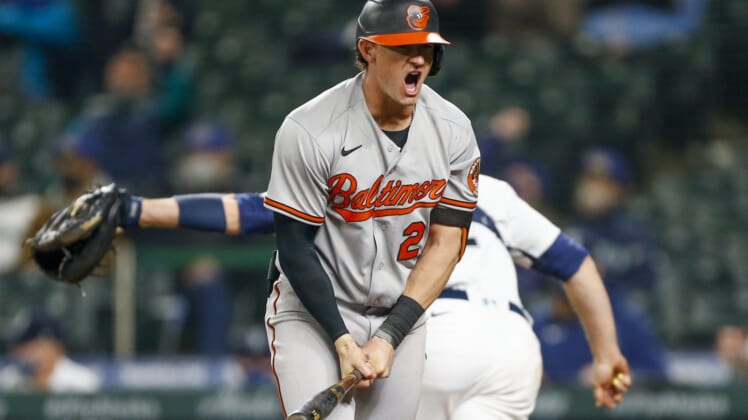 Cedric Mullins and Freddy Galvis hit home runs in a five-run eighth inning as the Baltimore Orioles defeated the host Seattle Mariners 5-3 Monday night in the opener of a three-game series at T-Mobile Park.

Baltimore’s Cole Sulser (1-0) got the victory with a scoreless inning of relief. Fellow right-hander Cesar Valdez pitched a 1-2-3 ninth for his seventh save of the season, striking out Jose Marmolejos and Dylan Moore swinging to end the game.

With No. 1 starter Marco Gonzales on the 10-day injured list with a left forearm strain, the Mariners went with a bullpen-by-committee approach.

Five Seattle pitchers blanked the Orioles on four hits through seven innings before Baltimore finally broke through in the eighth.

No. 9 hitter Pat Valaika, who had two of the Orioles’ eight hits, led off with a walk. Mullins then hit a drive to right-center field that right fielder Mitch Haniger made a leaping attempt to catch. The ball glanced off the end of Haniger’s glove as he crashed into the fence and the ball fell just beyond the wall.

Austin Hays doubled to left and, an out later, rookie right-hander Wyatt Mills replaced Misiewicz. Maikel Franco delivered an RBI groundout, and after Ryan Mountcastle walked it was Galvis who ripped a two-run shot to left-center to make it 5-1.

The Mariners pulled within 5-3 in the bottom of the inning. Tom Murphy led off with a walk against right-hander Shawn Armstrong and, an out later, Haniger hit a two-run homer to left.

Left-hander Tanner Scott replaced Armstrong and got Ty France to line out to center field and Kyle Seager to ground out to short to end the inning.

Murphy gave the Mariners a 1-0 lead in the fifth inning with a home run to right-center off Orioles starter Dean Kremer. The right-hander went six innings and allowed one run on two hits, with two walks and four strikeouts.