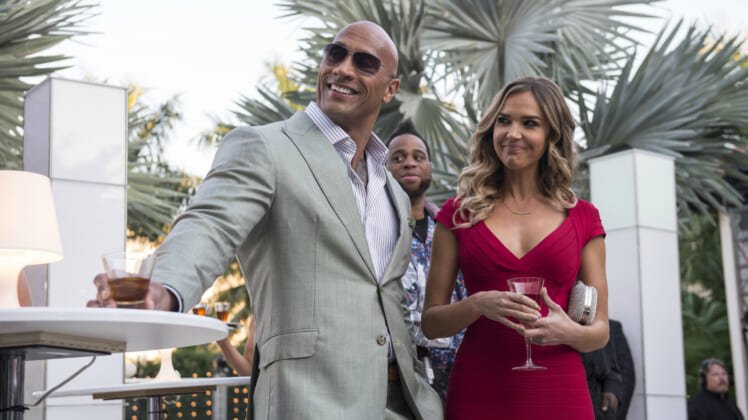 Ever since that pants fitting scene in “Be Cool,” the not-so-great follow-up to “Get Shorty,” The Rock (aka Dwayne Johnson) has been a star on the big screen. As poor as some of the scripts for the movies he’s starred in, most of them are still worth watching because it’s The Rock.

Last year when we heard our guy was going to be starring in a new HBO series, we were stoked. Unlike Olivia Wilde and her “merkin” on “Vinyl,” the show “Ballers” has made it to a second season which debuts this Sunday night (July 17th) on HBO.

However, before Andy Garcia joins the cast of “Ballers” in season two, let’s take a trip back to season one.

Tarvaris Jackson, you need to give Spencer Strasmore (The Rock) a call.

Rob Corddry plays Joe Krutel, who is Strasmore’s bobo in their co-venture.

You will remember Corddry (or maybe not) from the short-lived Fox series “The Winner.”

Back in 2006 when that showed debuted, Corddry was working that Michael Chiklis, Commish-era, hairstyle. Not sexy.

Season one of Ballers dove into the CTE concussion issue that is prevalent in today’s NFL. Important, yet not interesting, when it comes to a scripted show.

The good news is that the show excels with some interesting characters like Ricky Jerret (John David Washington) who’s a loose cannon on-and-off the field. Think Johnny Manziel at wide receiver.

Charles Greane plays Omar Miller, another fun character that is battling retirement while fighting the urge to play again and resisting the temptation to step out on his wife.

The best part of “Ballers” are the behind-the-scenes into an NFL players’ life and the how the money they earn is invested or spent foolishly.

However, the women (thank God for the bikini) and the cars (was that a Bugatti Veyron?) are fun eye candy to go along with Johnson.

Like most everything he does, The Rock makes “Ballers” enjoyable. Is it “The Sopranos?” No, yet it’s mindless fun and doesn’t take itself too seriously. And we hope that continues.

Blu-ray with digital and DVD versions of season one are now available at Amazon.