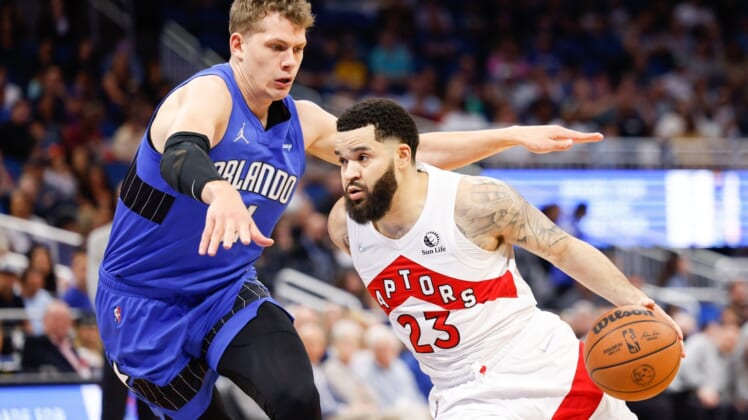 Magic rookie Franz Wagner sustained a sprained left ankle during the opening minute. Wagner, who started every game this season for Orlando, was injured while committing a personal foul in the post against Barnes.

The 6-foot-10 playmaker was replaced by fellow Michigan Wolverine Ignas Brazdeikis, who went 3-for-3 from beyond the arc in the first quarter. Wagner, who entered the night averaging 15.5 points and 4.6 rebounds per game, did not return as Orlando’s losing streak reached five games.

Orlando (20-58) trailed by 22 at the start of the fourth quarter but then went on a 20-8 burst, with Cole Anthony’s corner 3-pointer making it 93-83 with 4:42 remaining. VanVleet quickly answered with his fifth 3-pointer and OG Anunoby added a layup at the 3:37 mark to put the Raptors back ahead by 13 points.

VanVleet, one of 12 finalists for the 2021-22 Twyman-Stokes Teammate of the Year Award, also had five steals, five rebounds, three assists and two blocks for Toronto (45-32). Siakam finished with 16 points and 11 rebounds in 43 minutes.

Barnes went 6-for-6 at the free-throw line and had eight rebounds and seven assists. Gary Trent Jr. scored 15 of his 17 points in the first half, Anunoby contributed 14 points and Precious Achiuwa netted 11 of Toronto’s 17 bench points.

Orlando, which committed 21 turnovers that resulted in 32 points for the Raptors, was led by Mo Bamba’s 15 points and 10 rebounds. Brazdeikis tied his season high of 13 points for the second time in three games, and Markelle Fultz came off the bench to register 12 points, seven assists and five rebounds.

Devin Cannady, who signed a 10-day contract with Orlando on Thursday, played 29 minutes and scored nine points on 3-for-7 shooting from 3-point range.

Barnes scored nine points as Toronto ended the second quarter on a 20-4 run. Trent hit two free throws with sixth-tenths of a second left to help the Raptors take a 59-46 halftime lead, and Toronto pushed its advantage to 85-63 by outscoring Orlando 26-17 in the third quarter.

Orlando’s Jalen Suggs missed his ninth straight game because of a bone bruise in his right ankle, while starting center Wendell Carter Jr. remained sidelined by a sprained left wrist.