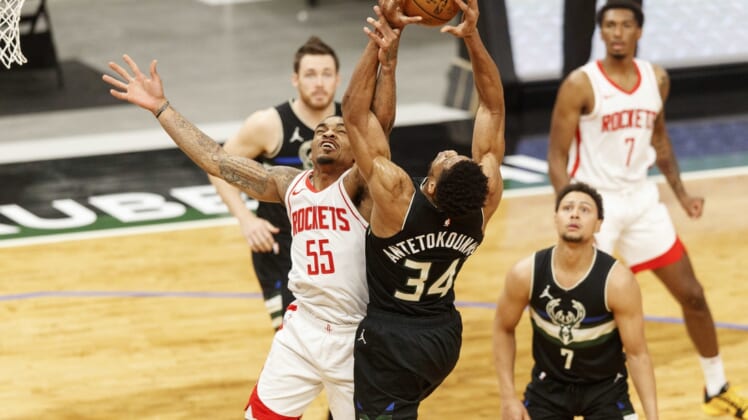 Red-hot shooting, balanced scoring and a dominant third quarter powered the Milwaukee Bucks to their fifth consecutive win in a 141-133 defeat of the Houston Rockets, Friday in Milwaukee.

After trailing for much of the second quarter, Milwaukee (43-24) opened the second half on a 17-6 run. The Bucks peppered the Rockets (16-51) with five 3-pointers over that stretch — two each from Khris Middleton and Jrue Holiday, and one from Brook Lopez.

Houston cut the deficit to two points twice in the late third quarter before Donte DiVincenzo scored seven of his 18 points consecutively, then Bryn Forbes added a 3-pointer for a 10-0 run. Milwaukee’s lead remained in double-digits for most of the way thereafter.

Antetokounmpo buoyed Milwaukee in the first half with 15 of his 17 points, and grabbed a team-high 11 rebounds. He also dished seven assists, second among all Bucks only to Holiday’s eight.

All five Bucks starters scored in double-figures, led by Lopez with 24. Middleton finished with 23 points and Holiday added 20.

Forbes came off the bench to shoot 3 of 4 from 3-point range en route to 11 points, and Bobby Portis scored 16 points with eight rebounds, part of Milwaukee’s 53-37 edge on the glass.

Kenyon Martin Jr. led the Rockets with 26 points in a balanced effort that included 23 points from Kelly Olynyk with a game-high 12 rebounds, and 19 points from Armoni Brooks off the bench.

Brooks knocked down two of his five 3-pointers in the final 1:09, sparking a late Houston rally that cut Milwaukee’s lead to six points, but the Rockets could get no closer.