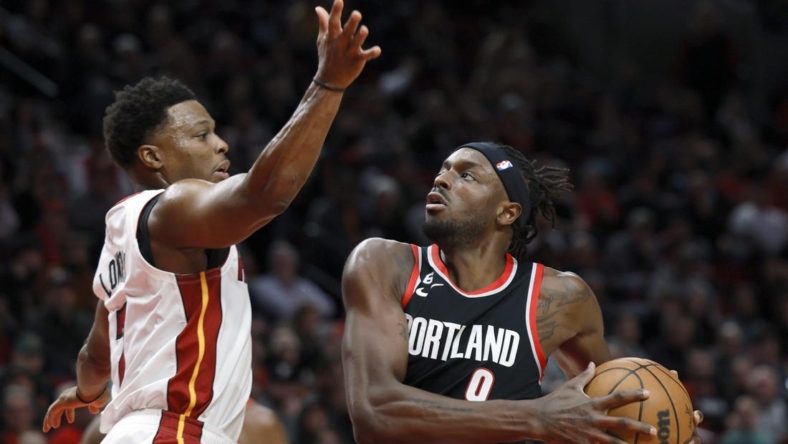 Bam Adebayo recorded 18 points and eight rebounds and the Miami Heat used a balanced approach for a convincing 119-98 victory over host Portland on Wednesday to knock the Trail Blazers out of the ranks of the unbeaten.

Kyle Lowry made five 3-pointers while scoring 17 points and Jimmy Butler also had 17 for the Heat. Max Strus had 16 points and nine rebounds off the bench, Caleb Martin had 16 points, eight rebounds and four steals and Tyler Herro added 14 points.

Portland star Damian Lillard scored 22 points in 26 minutes before leaving with a right calf strain in the third quarter. He had averaged 37.7 points over the previous three games.

The loss was the first in five games for the Trail Blazers, leaving the Milwaukee Bucks (3-0) as the NBA’s lone unbeaten squad.

Shaedon Sharpe had 15 points and eight rebounds off the bench and Anfernee Simons added 14 points for Portland. Jerami Grant had 11 points and Josh Hart had 10 points, six assists and three steals.

Miami outscored Portland 58-42 in the second half to turn the game into a blowout.

Lillard and Simons opened the third quarter with 3-pointers to give Portland a 62-61 lead before Miami seized control by scoring 20 of the next 28 points.

Sixteen seconds earlier, Portland was trailing by nine when it called timeout and Lillard limped toward the bench.

Lillard twice grimaced shortly before the timeout, once when he made contact with Martin and again a short time later when he got mixed up with Butler. The Trail Blazers ruled Lillard out at the start of the fourth quarter when they trailed 94-81.

The Heat opened the fourth quarter with nine straight points and the lead reached a game-high 26 when Strus drained a 3-pointer to make it 113-87 with 6:11 remaining.

Portland led by eight just past the midway point of the second quarter before the Heat finished with a 20-7 burst to take a 61-56 halftime lead.

Lillard had 16 in the half for the Trail Blazers, while Strus tallied 13 for Miami.