Balanced Pacers attack too much for short-handed Spurs 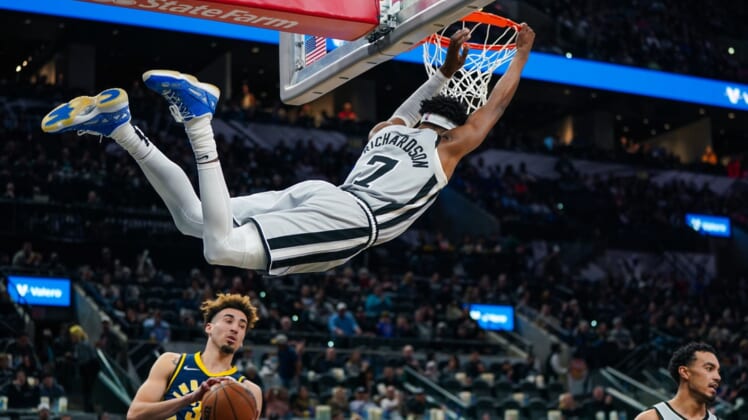 Duane Washington Jr. scored 19 points off the bench, all in the first half, and Tyrese Haliburton also hit for 19 points as the Indiana Pacers swamped the weary and short-handed San Antonio Spurs 119-108 on Saturday to snap a three-game losing streak.

The Pacers ruled the first half and held San Antonio throughout the second, as the Spurs were within single digits for only a few minutes in the third quarter and never got closer than 10 points in the final period.

The Spurs, playing the second game of a home back-to-back, were without starters Dejounte Murray (left calf contusion), Jakob Poeltl (lower back pain) and Keldon Johnson (rest), and performed like a team that was tired and missing key contributors.

Buddy Hield added 17 for the Pacers, with Isaiah Jackson and Chris Duarte contributing 15 points each, and Goga Bitadze scoring 10 for the balanced Indiana attack. Malcolm Brogdon missed the game while in concussion protocol and Lance Stephenson was out with a left ankle sprain.

Jock Landale led San Antonio with a career-high 26 points while Lonnie Walker IV scored 20, Devin Vassell had 19 and Josh Richardson hit for 16 points in the loss. Tre Jones racked up 12 assists and 10 rebounds in relief of Murray as the starting point guard.

Indiana, which came into the game having not played since Tuesday at home, trailed early on but quickly found its stride, leading 34-26 after a quarter of play. The Pacers continued to build on their advantage in the second period, going up by as many as 19 points after a 20-5 run over the middle of the period on the way to a 71-64 lead at halftime.

Washington Jr. poured in his 19 points in the opening half to lead all scorers, with Duarte adding 10 for Indiana. Landale led San Antonio with 17 points before halftime, including the final two baskets for the Spurs to keep them close. Walker IV added 15 and Vassell hit for 10 in the half for the home squad.

Indiana never let the Spurs any closer than seven points in the third quarter, pushing its lead back to 19 points with 4:15 to play in the period and taking a 97-82 advantage into the final quarter.