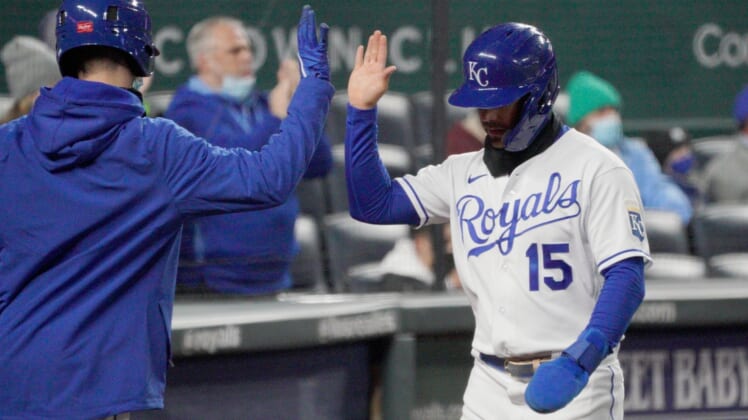 The top three hitters in the Tampa Bay lineup combined for nine hits and five runs as the Rays roughed up the host Kansas City Royals 14-7 on Tuesday.

With the Rays having won two of the first two games in a three-game series, the Royals have their first series loss of the season. Tampa Bay earned its fifth victory in a row.

The Rays had a pair of four-run innings and a three-run rally. Austin Meadows, Randy Arozarena and Joey Wendle had three hits apiece, and Meadows, Brandon Lowe and Mike Zunino homered for Tampa Bay.

Reliever Andrew Kittredge (3-0) retired all three batters he faced to earn the win. Trevor Richards pitched three innings of one-run ball for his first career save.

Royals starter Brad Keller (1-2) gave up five runs on three hits with one strikeout and three walks in 1 2/3 innings.

After Keller gave up back-to-back hits in the first, Lowe hit a ground ball to second. Instead of turning an inning-ending double play, Whit Merrifield bobbled the ball and a run scored.

Keller got into trouble again in the second inning. A pair of runners around a botched fielder’s choice loaded the bases with no outs. Meadows drove in a run with a sacrifice fly. Keller retired Arozarena, but then gave up an RBI single to Wendle and walked Lowe to load the bases, ending his night.

Reliever Jake Newberry walked the first two batters he faced, Manuel Margot and Yoshi Tsutsugo, forcing in two more runs. The Rays ended up with four runs on a single and five walks in the second.

Tampa Bay starter Rich Hill gave up four runs without recording an out in the third. He walked the first batter and then gave up four consecutive hits, including Nicky Lopez’s two-run single and Carlos Santana’s two-run double to end his night.

The Rays got one back in the fourth on a solo home run by Lowe, and another in the fifth on an RBI triple by Willy Adames.

Santana’s one-out home run in the fifth got the Royals within 7-5, but they left the bases loaded.

The Rays stroked five straight singles to start the sixth, scoring four runs and pushing the lead to 11-5.

Merrifield and Dozier drove in runs for the Royals in the sixth and seventh innings.

The Rays got three runs in the ninth on homers by Zunino and Meadows.