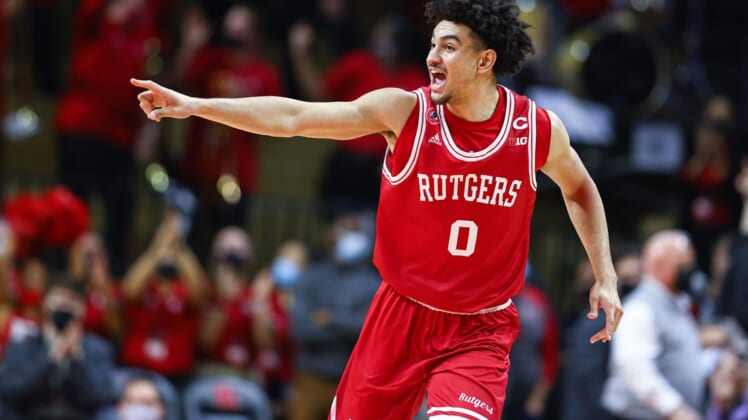 Geo Baker scored a season-high 27 points, and Ron Harper Jr. added 20 points as the Rutgers Scarlet Knights defeated Michigan for the first time in program history, beating the Wolverines 75-67 on Tuesday night in a Big Ten game at Piscataway, N.J.

Rutgers (8-5; 2-1 Big Ten) has won three straight games, tying its best run of the season. In addition to Baker’s scoring, he also had four rebounds and four assists in the historic win.

Michigan is now 14-1 against Rutgers in a series that goes back to the 1930s.

The Wolverines were led by center Hunter Dickinson, who scored 25 points. Moussa Diabate had 15 points and Caleb Houstan added 12 points.

Rutgers, which entered the game last in the league with an average of just five made 3-pointers per game, made a season-high 11 from deep on Tuesday, shooting 47.8 percent from behind the arc.

However, Michigan closed the first half on a 11-4 run, leaving Rutgers with a 39-30 advantage at the break.

Rutgers shot 48.3 percent overall in the first half and also had a 20-13 rebound edge. Harper led all first-half scorers with 15 points, making 5 of 8 shots from the floor, including four 3-pointers.

With 13:13 left in the second half, Caleb McConnell hit a corner three-pointer to give Rutgers its biggest lead of the game at 53-36.

Michigan answered by cutting its deficit to 60-53 on Diabate’s three-pointer with 6:17 remaining. However, Rutgers held on as Michigan never got closer than seven points in the second half.

Rutgers will aim to extend its win streak to four games on Saturday when it hosts Nebraska.