Baker Mayfield content as Carolina Panthers backup; will not request a trade 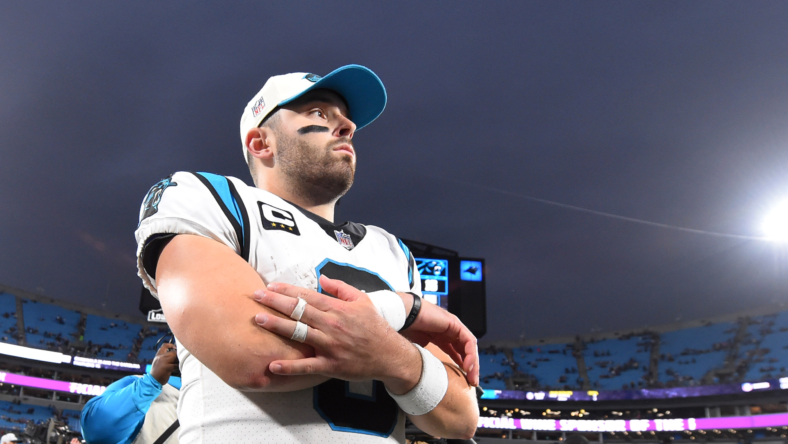 When the Carolina Panthers traded for former No. 1 pick Baker Mayfield ahead of the 2022 season, the expectation was that he’d at least be a viable stopgap option under center.

With a new man in Steve Wilks calling the shots, the decision has been made to go with Walker under center moving forward. While Mayfield would certainly love to start, he’s not pushing back against the decision and hasn’t requested to be dealt ahead of next Tuesday’s NFL trade deadline.

Baker Mayfield on being relegated to QB2 duties, via NFL.com

When asked if he thought about requestions a trade, Mayfield simply responded “I want to be here.”

There’s a lot of moving parts here. Despite their surprising win over the Tampa Bay Buccaneers last week, the Panthers are 2-5 and playing out yet another lost season in Charlotte. They also have no real idea what the future of the quarterback position is going to be following the ill-fated trades for both Mayfield and injured signal caller Sam Darnold. Perhaps, Walker can show something.

At this point, no team is going to trade for Mayfield to be a starter. His best chance to actually see the field again is as Walker’s backup with the Panthers. It also doesn’t seem like drama has taken hold behind the scenes like we saw during the latter stages of his tenure with the Cleveland Browns.

“My role right now is to help us win anyway I can. That’s practicing, helping out in the QB room, doing scout-team stuff. I’m enjoying what I’m doing right now. Like I said, obviously I’d like to be out there, but P.J. played his ass off and deserves to be out there again. So I’m doing whatever I can to help this team win.”

Baker Mayfield on P.J. Walker being the starter over him

Mayfield, 27, is in the final year of his rookie contract and will hit free agency in March. Any team looking to acquire him, however unlikely it might be, would be on the hook for a pro-rated amount of his $4.86 million base salary. In a vacuum, that’s not a whole lot to pay out for a top-end backup quarterback. At this point, that’s pretty much what Mayfield is.

The best-case scenario would be for Mayfield to see some action moving forward on the season to prove his worth for free agency. Then, he might be able to land on a team that would give him an opportunity to compete for a starting job.