Baker Mayfield is back at the helm and will start for the Carolina Panthers in Baltimore. 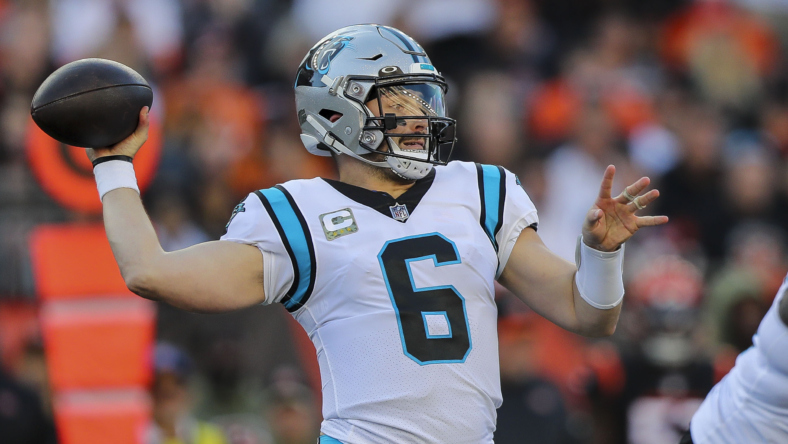 Carolina Panthers’ former starting quarterback Baker Mayfield has found himself back in the lead chair due to an injury to P.J. Walker, who has been the team’s starter since Week 6 despite several up-and-down performances, with the offense being forced to lean hard on the running game.

According to ESPN’s David Newton, the network’s go-to source for all things Panthers, Walker is dealing with a high ankle sprain that will keep him out for Week 11 against the Baltimore Ravens.

While the extent of the injury isn’t completely known just yet, we do know Mayfield has been healthy and is ready to return to the starting role he once had before suffering a foot injury against the San Francisco 49ers in Week 5.

This could turn out to be a great thing for the Panthers and their fans, who might not have been so confident in the passing game with the team heading into Baltimore to face an excellent Ravens squad.

In backup duty against the Cincinnati Bengals in Week 9, Mayfield looked very sharp after replacing Walker in the second half, going 14-of-20 for 155 yards and two touchdowns. Even better, no turnovers.

Baker Mayfield is back

However, when it comes to the polarizing quarterback, any news involving Mayfield’s name always seems to come with an extra dose of something outside the lines. Timing is everything with this guy, and he has managed to hit the nail on the head once again, as only he can.

Following Carolina’s 25-15 win over the Atlanta Falcons on Thursday night, a helmet-free Mayfield could be seen head-butting several surprised and unwilling participants who, of course, were all still wearing helmets.

While it was pretty comical and relatively minor, it was still very much a Baker Mayfield thing.

As Al Michaels pointed out in a partially joking manner, it was a good way to end up in concussion protocol. Especially when the head-butting assembly line included seven players. And who knows, we can only read body language, but perhaps the players love that kind of enthusiasm from the wild man and think he’s a total animal.

Nevertheless, Mayfield is healthy — as his head is apparently made of rocks — and he’s ready to return to his familiar role of starting quarterback and chief alpha dog.

With Carolina having lost five of its last seven games, replacing Walker might have been the answer anyway in order to give the team a spark and attempt to balance the running attack with an effective passing game.

The glaring question that no one could possibly answer at this point is which version of Mayfield will show up in Baltimore.

Should he prove to be ineffective, don’t forget Carolina also has Sam Darnold waiting in the wings, and head coach Steve Wilks has already shown he won’t hesitate to make a change if the offense is in dire need of a boost. We’ll see if Mayfield can provide that spark on Sunday.