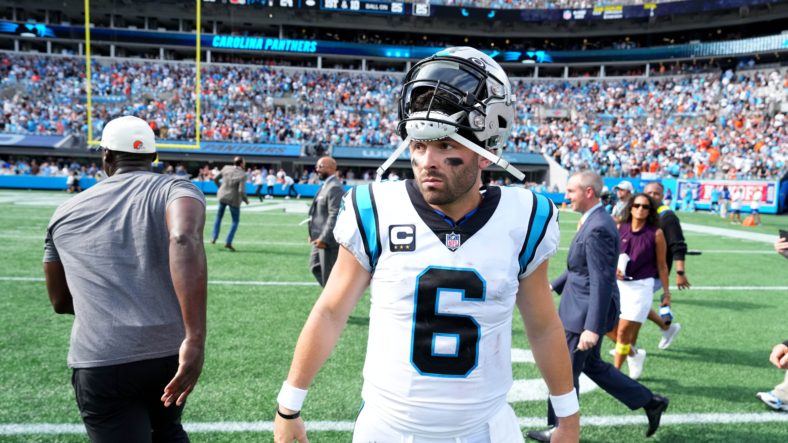 Just four years ago, Baker Mayfield became the surprise No. 1 overall pick in the 2018 NFL Draft by the Cleveland Browns. Obviously, the Browns have since moved on by landing on Deshaun Watson as their future of the franchise instead. This sudden change this past offseason opened up the possibility for Mayfield to land with a new team, namely the Carolina Panthers.

But even once he arrived to the Panthers, Mayfield entered a two-man QB competition, battling with the third overall pick from the same draft class, in Sam Darnold. While the battle may not have been a legitimate duel, Mayfield nevertheless emerged as the starter. The same week the announcement was made that Mayfield would be Carolina’s QB1, Darnold suffered a high ankle sprain to wipe him out at least the first few weeks of the season.

Buried in the madness of the Carolina QB situation is that both Mayfield and Darnold are in the final year of their rookie contracts and are set to be free agents at the end of the season. Of course, strong play by either one could prompt general manager Scott Fitterer to offer a contract extension to either quarterback, but the Panthers are more likely to keep their options open.

Then again, that line of thinking flies in the face of what one NFL insider believes. ESPN’s Dan Graziano “wouldn’t be surprised” if Mayfield returns to Carolina next season, whether in a starting role or as a backup remains to be seen.

Carolina Panthers’ future QB situation is murky, with or without Baker Mayfield

For now, Mayfield appears to have quickly immersed himself in coach Ben McAdoo’s offense, but they’re still searching for their first win. A year ago, we saw the Panthers start 3-0 under Darnold, quickly becoming a hot topic within the NFL before fading late in the season. Now Mayfield will look to avoid an 0-2 start as the Panthers head to MetLife Stadium to take on the 1-0 New York Giants.

As a reminder, they also selected Matt Corral in the third round of April’s draft, but he’s out for the season with a Lisfranc injury, so we won’t get any chance to see how he fares in his rookie season. P.J. Walker is the team’s current backup, and he too is on a one-year contract.

Depending on their performance in coach Rhule’s third season at the helm, the Panthers could find themselves with a top draft pick once again. Carolina picked sixth in 2021 and eighth in 2020 after consecutive five-win seasons. The Panthers have their own first and second-round picks in the 2023 NFL Draft, one that will include Alabama QB Bryce Young and Ohio State QB C.J. Stroud. Carolina does not have their own third-round selection after making the trade up to select Corral.