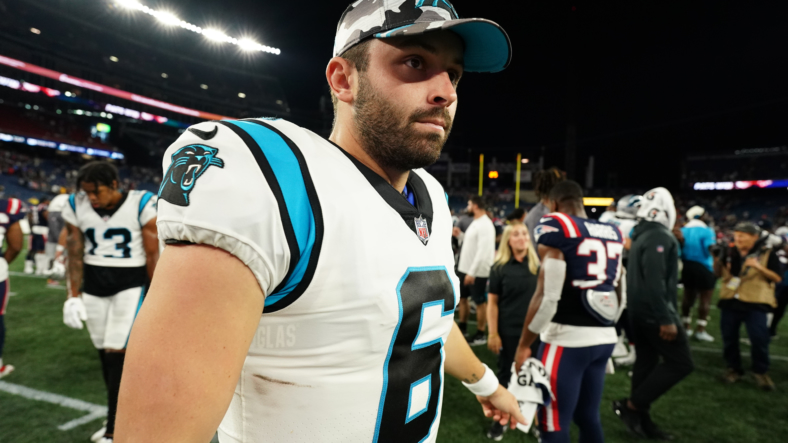 The Panthers announced their captains for the 2022 season on Thursday, including Mr. Mayfield on that list. The former Browns No. 1 pick will join Christian McCaffrey, Shaq Thompson, Taylor Moton, Donte Jackson, Brian Burns and Jeremy Chinn as team captains. He’s the newest member of the organization to be named captain.

While a majority of starting quarterbacks around the NFL are team captains, Mayfield’s inclusion is a bit surprising. He was acquired from Cleveland a mere two months ago and didn’t take part in off-season programs with the Panthers before training camp.

This comes on the heels of suggestions that Mayfield’s personality rubbed some in a wrong way during his time with the Cleveland Browns. Of course, that could just be an example of the organization bad-mouthing him in order to safe face after replacing the veteran with embattled quarterback Deshaun Watson.

Related: Baker Mayfield and the top NFL QBs of 2022

Mayfield led Cleveland to a rare playoff appearance back in 2020. At that point, it seeemd he would be the team’s franchise quarterback. Then, came a disastrous 2021 campaign for both the quarterback and organization, leading to some major drama behind the scenes and Mayfield’s eventual departure.

It certainly is an interesting dynamic to look at. The drama last season started with issues between Mayfield and then-Browns wide receiver Odell Beckham, leading to Cleveland waiving the Pro Bowl wide receiver. Once OBJ was gone, things did not trend in a better direction. That included Mayfield calling out the coaching staff.

Now in Carolina, the embattled quarterback is just happy he’s on a team that actually wants him.

“I’m extremely excited for this new start in Charlotte. Obviously, I think it’s kind of known now, some familiar faces there, some people that I know and a lot more to meet. It’s just an exciting time for myself and my family and just this new chapter.”

Baker Mayfield said after being acquired by the Carolina Panthers

We know Mayfield wants to exact revenge against his former Browns team come Sunday afternoon in Carolina. He’ll now be one of those out at mid-field to shake hands with his former teammates. That will be a popcorn-worthy time.