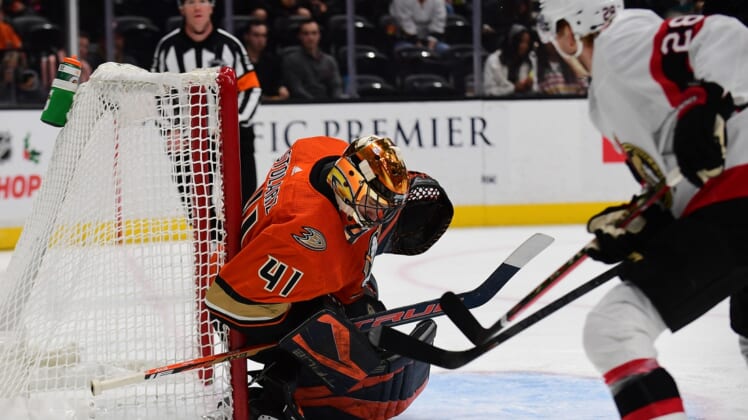 Getting a rare start in the Anaheim Ducks’ net, backup goaltender Anthony Stolarz made 34 saves in a 4-0 shutout of the visiting Ottawa Senators on Friday.

Rickard Rakell had a goal and an assist and Trevor Zegras had two assists. Isac Lundestrom, Derek Grant and Troy Terry also scored for Anaheim.

Ottawa’s losing streak was extended to four games, and the Senators are 1-9-1 in the month of November.

The Senators outshot the Ducks by a 34-33 margin, and Tim Stutzle and Chris Tierney each put shots off the goalpost. Despite all this pressure, Ottawa couldn’t beat Stolarz and went scoreless during four power-play chances.

Stolarz was making only his fifth appearance of the season, as regular goalie John Gibson started 16 of Anaheim’s first 20 games. Though Stolarz hadn’t played since November 5, he showed no signs of rust in continually thwarting the Senators to record his first shutout of the season.

Lundestrom ended a six-game points drought by scoring the opening goal 16:43 into the first period. Rakell forced a takeaway behind Ottawa’s net and sent a tremendous backhand pass to a wide-open Lundestrom in front for the score.

Grant’s first goal of the season came in unusual fashion, with some unintended help from two Senators defensemen. Midway through the second period, Grant’s initial shot was stopped by goalie Anton Forsberg, except the puck bounced up and deflected off both Victor Mete and Tyler Ennis on its way into the net.

With only 43 seconds left in the second period, Terry added a power-play goal to extend Anaheim’s lead. Terry leads the Ducks in both goals (13) and points (23) in his breakout season.

Rakell added an insurance goal at 9:05 of the third period. After missing 10 games with an upper-body injury, Rakell has collected four points (two goals, two assists) in three games since his return to action.