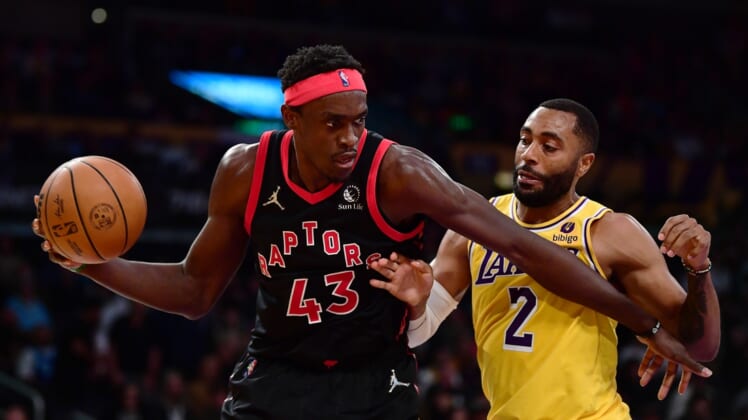 The Toronto Raptors will try to extend their five-game winning streak and improve their playoff position when they return home for a rematch with the Los Angeles Lakers Friday night.

The Raptors completed a six-game road trip Wednesday with a 103-100 victory over the Los Angeles Clippers. That completed a Los Angeles sweep following a 114-103 wire-to-wire win over the stumbling Lakers on Monday.

The Raptors have the same record (39-30) as the sixth-place Cleveland Cavaliers in the Eastern Conference and play nine of their final 13 regular-season games at home. The Cavaliers and Raptors are two games behind the Chicago Bulls, though Cleveland holds the tiebreaker over Toronto.

“I look at (the standings) a lot, it’s kind of fun,” Raptors coach Nick Nurse said before the game on Wednesday. “Try to look through and see what’s happening. I’m not going crazy about it or losing any sleep about it but I think it’s interesting.”

Pascal Siakam had 31 points and 12 rebounds Wednesday for Toronto and has scored at least 20 points in a career-best eight consecutive games.

The Lakers opened a four-game trip with a 124-104 loss to the Minnesota Timberwolves on Wednesday. It was the third straight loss for the Lakers, who have dropped their past 11 away games and are 9-23 for the season on the road.

“At the end of the day, you keep pushing forward,” said LeBron James, who scored 19 points on 8-of-21 shooting from the field. “I am very comfortable with being uncomfortable so, it doesn’t bother me too much. Obviously, I am a competitor, I want to win. You definitely get frustrated with some things that happen on the floor, but you control what you can control. What you can’t control, you don’t worry about it.”

The Timberwolves also rubbed it in with some trash talk, notably from Patrick Beverley and Karl-Anthony Towns.

“This is a front-running league,” said Wayne Ellington, who scored six points off the bench for the Lakers. “When you’re up, everything is going great. When you’re down, they’ll kick you. So right now, we’ve been getting kicked. And teams have been enjoying it.”

“It’s easy to be comfortable when you’re winning,” James said. “I have never been that guy. It is all about how comfortable can you be when things become uncomfortable.”

Carmelo Anthony added 16 points for the Lakers off the bench and Russell Westbrook had 15.

The Raptors’ road trip was impressive. They dropped the opener at Cleveland, then defeated the San Antonio Spurs, the league-leading Phoenix Suns and the Denver Nuggets before their wins in Los Angeles.