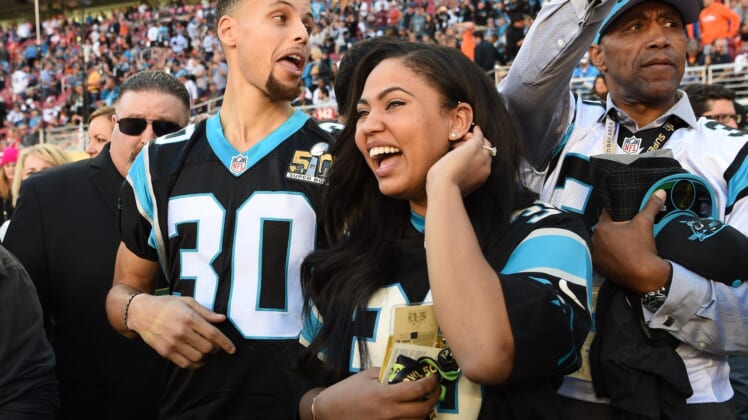 Feb 7, 2016; Santa Clara, CA, USA; Golden State Warriors guard Stephen Curry and his wife Ayesha Curry stand on the sidelines prior to the halftime show for the game between the Carolina Panthers and the Denver Broncos in Super Bowl 50 at Levi’s Stadium. Mandatory Credit: Kyle Terada-USA TODAY Sports

Golden Stater Warriors four-time All-Star Steph Curry is one of the most electrifying athletes of the current generation. He’s more than just a basketball talent, with his impressive off-the-court presence making him someone who has captured our attention.

His wife Ayesha Curry has also made a name for herself in the culinary world, launching a pop-up restaurant in San Francisco, developing a cult following on social media and launching her book “The Seasoned Life.”

She also constructed her kitchen in hopes of hosting her own food show.

Between the lighting and cleanliness, it seemed like the perfect venue to make this dream come true.

While the success has certainly been made apparent on Ayesha’s Home Kitchen, she told Eater magazine there is still plenty of negative aspects to the project.

Curry was looking forward to spending the time with her daughters Riley and Ryan at home while simultaneously taping the show. The show heads into its hopefully third season, with a journey that has been anything but a cherry on top.

“It was a nightmare because I would hear the girls cry and we’d have to wait for them to settle down, and then I couldn’t actually see them all day because I didn’t have as many breaks as I thought I would,” Curry explained in an interview with Eater magazine’s Monica Burton.

If the next installment of the show does indeed occur, the magazine explains it will not be from the original kitchen. The Curry family has moved from the house that possesses the “perfect television” location which she explained is maybe for the best.

“I thought I could have the best of both worlds. I’ve learned my lesson entirely,” she says.