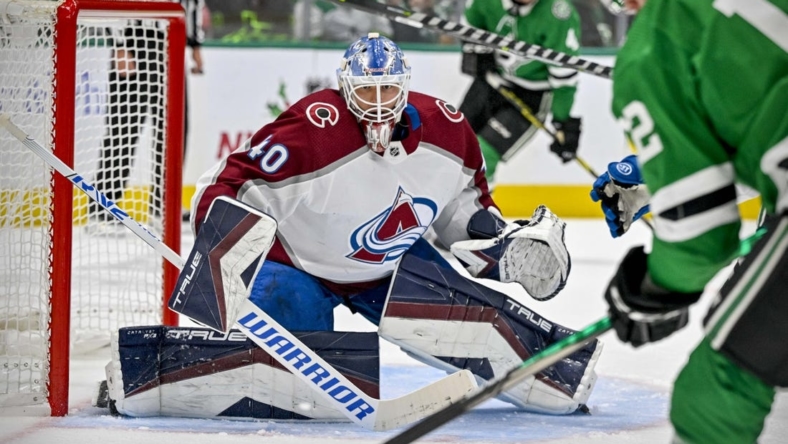 Mikko Rantanen scored the only goal in a shootout as the visiting Colorado Avalanche beat the Dallas Stars 3-2 on Monday night.

Cale Makar and Alex Newhook scored in regulation and Rantanen had an assist for the Avalanche, who swept their three-game road trip and won for the seventh time in eight games. Alexandar Georgiev made 22 saves through regulation and overtime and two more in the shootout.

Jason Robertson scored twice for the Stars and Jake Oettinger turned away 33 shots through regulation and OT, then one more in the shootout.

Rantanen got the winner when he skated in on Oettinger and beat him with a wrister to the glove side. Robertson missed the net on the last chance for Dallas, which fell to 6-2-2 in its past 10 games.

Makar gave Colorado a 1-0 lead on a power play at 10:10 of the first period. He got a pass from Rantanen at the top of the right circle, and his one-timer beat Oettinger to the far side.

It was his fifth of the season and the 200th point of his NHL career. Makar reached the milestone in 195 games, which is the fastest by any defenseman in NHL history.

The Stars tied the game at 5:33 of the second period with a little help from the Avalanche. Ty Dellandrea put a shot on net from the half-boards, and Robertson went after the rebound. He was crosschecked from behind by Andreas Englund as he got his stick on the puck, which trickled in between the post and Georgiev’s skate as the goal came off its moorings.

A video review determined Englund’s check caused the net to dislodge, and the goal stood.

Colorado went back in front early in the third period. Englund’s shot from the point was blocked and went to Evan Rodrigues, whose shot from the right circle went off Oettinger’s pads to the front of the crease. Newhook’s quick stick knocked it in to give the Avalanche the lead at 2:06.

It was his fourth of the season.

Oettinger went off for an extra skater in the final minutes and Robertson tied it with a sharp-angle shot with 25.8 seconds left to send it to overtime. His second goal of the night was his 14th of the campaign.