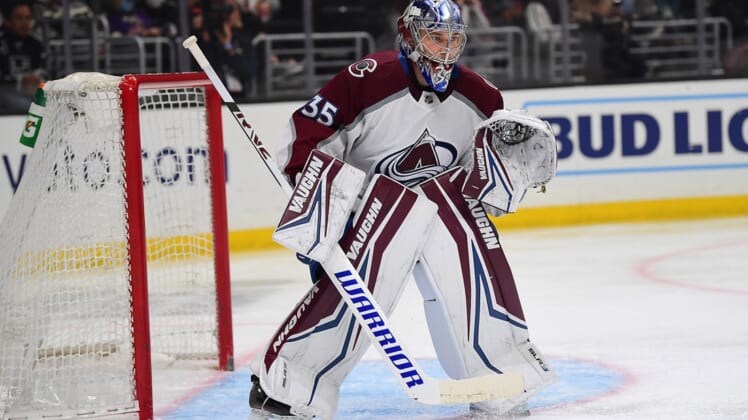 The two-game surge came after he stopped 35 of 36 shots in a 2-0 road loss to the Carolina Hurricanes on March 10. In that contest, the only goal he allowed came on an Ethan Bear wrist shot from the right boards that deflected in off Colorado’s Nazem Kadri. The Hurricanes later added an empty-net goal.

“It’s three games in a row,” Colorado coach Jared Bednar said. “The only one to get by him is a lucky bounce off our own player. … I think he’s playing with a ton of confidence, and it’s pouring over to the rest of our team.”

Kuemper ranks third in the NHL with five shutouts. He also had back-to-back shutouts on Feb. 13 at Dallas (23 saves) and Feb. 16 at Vegas (29 saves) and is the first Avalanche goalie to record consecutive shutouts twice in the same season.

“He looks great,” Bednar said. “He looks big in the net. He’s staying upright. He looks quick down low. He’s getting side to side on some real good plays and on rebound plays. He’s looking confident. It’s a positive sign. It’s probably the best stretch that he’s played all year.”

Kuemper deflected credit to his teammates following the win over the Kings.

“We didn’t really give them anything off the rush,” he said. “And once we got into the zone, we were closing quick, taking away their time and space. And when they were getting shots, they were to the outside and I was able to see them, and the guys did an amazing job in front of me.”

The Avalanche have cleaned up against the Pacific Division, improving to 13-1-1 with the win at Los Angeles. Colorado won the only previous meeting with San Jose, 6-2 on Nov. 13 in Denver.

The Sharks come into the Friday contest 10 points behind the Vegas Golden Knights for the second wild-card spot in the Western Conference, but with three games in hand.

It will be the second game of a back-to-back set for San Jose, which lost 3-0 at Los Angeles on Thursday. Kings goalie Cal Petersen made 29 saves, including two on breakaways by Tomas Hertl, and Anze Kopitar scored what proved to be the game-winner with a power-play goal in the second period.

San Jose committed six penalties in the contest, including four in the second period.

“We just took too many penalties,” coach Bob Boughner said after the Sharks had a four-game point streak snapped. “Every time we got a couple shifts and flow to our game, we took another penalty. The whole second period it seemed like I played the same six forwards, we were killing so much.”

The Sharks will look to reverse a woeful recent history against the Avalanche. Since the start of the 2019-20 season, Colorado had a 9-2-0 record vs. San Jose.