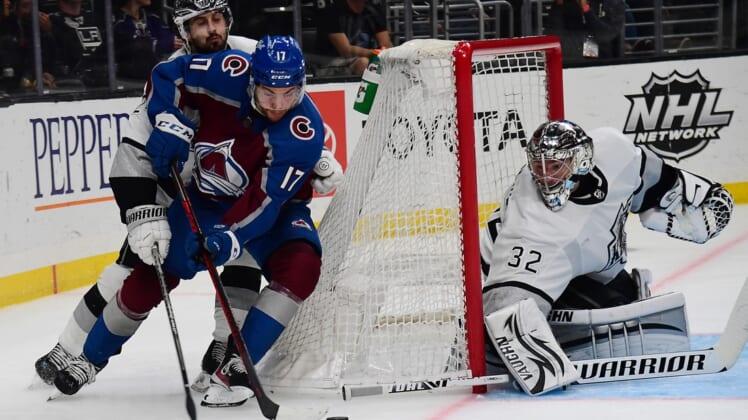 The Colorado Avalanche were outshot and outplayed Thursday night in Los Angeles but they still came away with a convincing victory.

When you’re on a hot streak, even subpar games lead to points.

Colorado has gone 23-3-2 since Nov. 6 and is now atop the Western Conference standings. The Avalanche have won 14 straight at home and will put that streak on the line when they host the Montreal Canadiens on Saturday night.

Colorado won the first meeting between the teams, 4-1, in Montreal on Dec. 2.

The Canadiens reached the Stanley Cup Final last season but don’t look like the team that came within four games of its first title in 28 years. Montreal has won just three games since Nov. 20 and is 3-12-4 in that span.

One of those victories came on the current five-game road trip, a 5-3 win over Dallas on Tuesday. The Canadiens lost 4-3 in overtime at Vegas on Thursday night.

Part of the struggles for Montreal have been injuries and absences. Veteran goaltender Carey Price entered the NHL/NHLPA player assistance program for substance-use issues in October and restarted the rehab process for a knee injury this week. Jake Allen, who helped St. Louis to a title three years ago, will miss eight weeks with a lower-body injury, it was announced this week.

That leaves the Canadiens with little experience in goal, but they like Sam Montembeault, who appears to be their top goalie for now.

“What I like with him is the way he shows up every day, working on his game,” Montreal coach Dominque Ducharme said about Montembeault. “You can see it’s paying off. He comes into the game with a plan. He’s getting more and more comfortable within that plan. It’s a great opportunity for him.”

The Avalanche are having no big issues between the pipes. Their No. 1 goaltender, Darcy Kuemper, made 40 saves in the win over the Kings and his backup, Pavel Francouz, got his second career shutout at Anaheim on Wednesday night.

Colorado’s surge to the top of the West has been mostly because of its offense, which leads the NHL at 4.18 goals a game. The Avalanche are getting scoring from defensemen, too, who lead the league in goals from that position with 39.

Saturday starts a stretch where Colorado plays six of its next seven games at home. The last time the Avalanche lost on home ice was in overtime against Columbus on Nov. 3. Their only two regulation losses at home came against St. Louis and Vegas.

Colorado has learned to play close games, which can only help when the postseason starts. Seven of the Avalanche’s last 10 wins are by two goals or fewer.

“Last year, we didn’t have many tight games,” Nathan MacKinnon said. “We beat a lot of teams really bad the whole year. So I think in the playoffs, that didn’t help us. We’re in high-pressure situations against really good teams this season.”

Colorado has played the last three games without Valeri Nichushkin, who entered health and safety protocol on Monday. He was close to returning Thursday, so he is a possibility for Saturday.