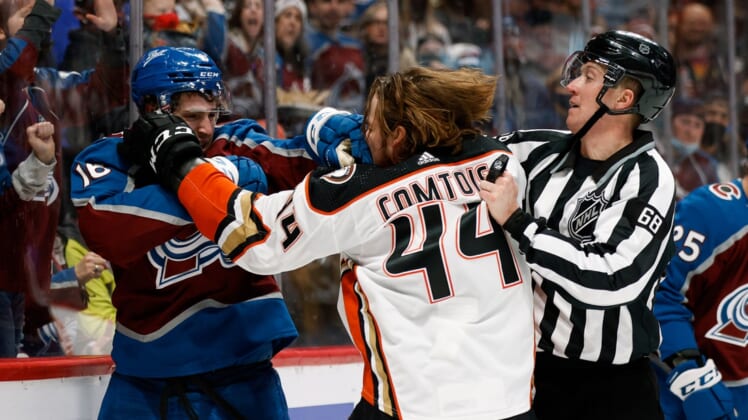 Mikko Rantanen had a goal and two assists while Logan O’Connor, Gabriel Landeskog and Devon Toews also scored, and the Colorado Avalanche beat the Anaheim Ducks 4-2 in Denver on Sunday.

Nathan MacKinnon had three assists and Darcy Kuemper stopped 29 shots for Colorado, which was playing for the first time since Dec. 16 due to a COVID-19 pause.

Cam Fowler and Sam Carrick scored goals, Kevin Shattenkirk had two assists and John Gibson made 32 saves for the Ducks, who lost their fourth straight.

Anaheim was without its captain, Ryan Getzlaf, who entered the NHL health and safety protocol before the game. Max Comtois was activated off the list after missing two games. He had missed 18 of the last 19 games due to injury and COVID-19.

The game was tied at 2-all when MacKinnon fed O’Connor on an odd-man rush, and he roofed a shot at 18:49 to put the Avalanche ahead. Gibson came off for an extra skater and Rantanen scored an empty-net goal.

The Ducks struck first when Shattenkirk sent a shot to the net that Kuemper saved. Carrick was there to knock it in between his pads at 1:55 of the first period. It was his eighth goal of the season.

It stayed that way until early in the second period. With Sam Girard in the penalty box for shooting the puck over the glass, Anaheim pressured Colorado on the power play. The Ducks finally broke through when Fowler skated down the slot and redirected a pass from Comtois off the post and in at 3:22. It was his fifth of the season.

The Avalanche responded on the power play later in the period. Rantanen had the puck above the circles and slid a pass to Toews as he entered the zone, and his slapshot beat Gibson high for his fifth marker of the season, making it 2-1 at 11:47.

Colorado tied it up early in the third with Anaheim short-handed. Gibson made a save on MacKinnon’s slapshot from the left circle but Landeskog tapped in the rebound at 3:19. It was his 10th goal of the season.