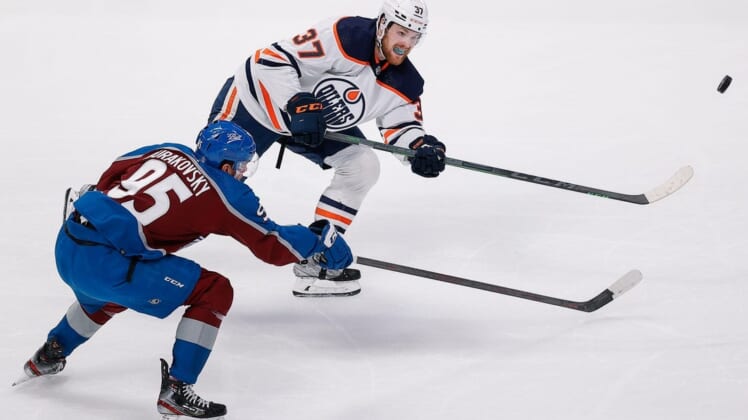 J.T. Compher scored two goals, Cale Makar had a goal and two assists and the Colorado Avalanche beat the Edmonton Oilers 8-6 in Game 1 of the Western Conference finals on Tuesday night in Denver.

Nathan MacKinnon, Gabriel Landeskog and Mikko Rantanen had a goal and assist each, Nazem Kadri and Andrew Cogliano also scored and Devon Toews had two assists for Colorado.

Avalanche goalie Pavel Francouz stopped 18 of 21 shots in relief of Darcy Kuemper, who left in the second period with an upper-body injury after allowing three goals on 16 shots.

Game 2 is Thursday night in Denver.

Edmonton’s Mikko Koskinen turned aside 20 of 21 shots in relief of Mike Smith, who yielded six goals in 25 shots.

Kane gave the Oilers a 1-0 lead at 5:04 of the first period, his 13th goal of the postseason, and the Avalanche answered 36 seconds later on Compher’s first goal of the night.

MacKinnon put Colorado ahead 2-1 at 15:10, his ninth goal of the playoffs.

Hyman tied it for the Oilers at 19:37, his ninth of the postseason, as he matched the franchise record by scoring a goal in a sixth consecutive playoff game.

Makar scored just nine seconds later. Edmonton challenged the goal for offside, but the goal was upheld, giving the Avalanche a power play thanks to the failed challenge. On the man advantage, Kadri scored 32 seconds into the second period to make it 4-2.

McLeod got the Oilers within a goal when he knocked in a rebound at 2:59 of the second, but Rantanen’s slapshot at 4:38 made it 5-3.

Compher’s deflection at 6:20 made it 6-3, prompting the Oilers to send in Koskinen for Smith.

Cogliano scored at 16:20 of the second period for a 7-3 edge, but McDavid scored his eighth of the playoffs just 31 seconds later.

Ryan cut the deficit to 7-5 at 3:28 of the third period, and Nugent-Hopkins got Edmonton within one with a power-play goal at 12:36.

Koskinen came off for an extra skater with 1:53 left, and Landeskog scored into an empty net with 21.4 seconds remaining.