Avalanche, Oilers in search of defense for Game 2 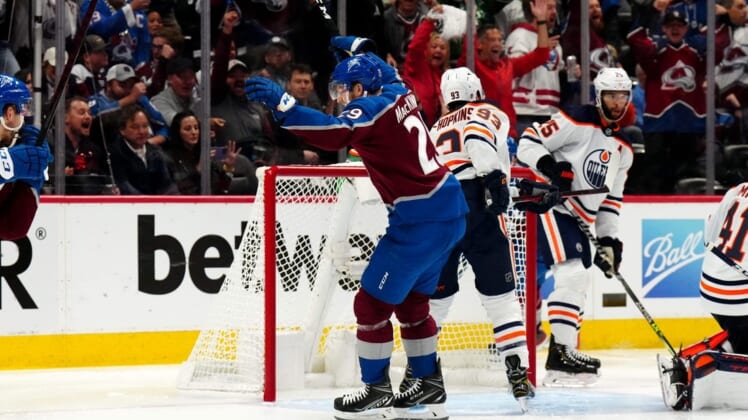 While the Western Conference finals were expected to feature plenty of goals, a revival of 1980s-style NHL scoring outbursts was not quite expected.

The Colorado Avalanche had to sweat out an 8-6 victory over the Edmonton Oilers in Game 1 on Tuesday after they led 7-3 at one point. A total of 25 of the 36 skaters recorded at least a point in a game that even left Hall of Famer Wayne Gretzky calling for more defense on the TNT broadcast.

The goals might not dry up for Thursday’s Game 2 in Denver. Colorado is being tight lipped about the status of starting goaltender Darcy Kuemper, who left Tuesday’s game in the second period with an upper-body injury.

Kuemper was delayed in coming out for the start of the second period, which coach Jared Bednar said was due to an issue with one of his leg straps. He was replaced by Pavel Francouz 7:19 into the second.

“I don’t know how long he’ll be out,” Bednar said Wednesday. “He could be back tomorrow for us. … I’m not going to get into his injury, especially this time of year.”

Francouz stepped in for Kuemper in the first round against the Nashville Predators as well, finishing off a Game 3 victory before closing out the Predators in Game 4.

Whichever goaltender starts Thursday, the Avalanche know they need to do a better job of slowing down Edmonton’s skaters.

“I think we can do a much better job defensively,” said J.T. Compher, who had two goals in Game 1. “Lots to clean up. Throughout our lineup we can be much better defensively and make it harder on their forwards. We don’t want to play the game that we played (Tuesday). We want to be tighter defensively.”

The Oilers feel the same way after getting blitzed in Game 1 for the second straight series. Starting goaltender Mike Smith left in the second period after allowing six goals on 26 shots. Mikko Koskinen came on and turned away 20 shots.

On Wednesday, Oilers coach Jay Woodcroft would not say who would start in goal in Game 2.

Edmonton has dropped the first game of all three playoff series before recovering. Tuesday’s loss was similar to Game 1 against the Calgary Flames in the second round when they dropped a 9-6 decision. Koskinen and Smith combined for 39 saves in that one, the same as Tuesday night’s total against the Avalanche.

“Obviously when you’re giving up touchdowns in the (opener of the) last two series, it’s not a good sign,” Smith said. “But I think it shows a lot of our team that when we’re down we’re not out of the fight.”

The Oilers will cling to the positives heading into Thursday night but also know things have to improve.

“We scored six goals on their goaltending tandem in their building; that should be enough to win the game,” Woodcroft said. “Colorado is a different animal. The bottom line is we’re going to have to elevate our game a little bit, and it’s on the defensive side of things. But we’re a confident group.”