Sportsnaut
May 19, 2021; Denver, Colorado, USA; St. Louis Blues defenseman Justin Faulk (72) falls to the ice after being hit in the third period by Colorado Avalanche center Nazem Kadri (91) in game two of the first round of the 2021 Stanley Cup Playoffs at Ball Arena. Kadri would be ejected from the game for an illegal hit to the head. Mandatory Credit: Isaiah J. Downing-USA TODAY Sports

The NHL Department of Player Safety issued the suspension last Friday following Kadri’s illegal check to the head of St. Louis Blues defenseman Justin Faulk in Game 2 of a first-round playoff series on May 19.

The NHL Players’ Association filed the appeal for Kadri on Sunday.

Kadri didn’t play in Games 3 and 4 of the series, both won by the Avalanche. Colorado advanced to the next round of the playoffs and will play the winner of the series between the Vegas Golden Knights and Minnesota Wild, with Kadri’s availability for any potential games of that series dependent on his appeal. 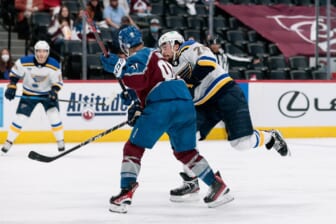 It is his third suspension in four years. The then-Toronto Maple Leafs forward was banned three games after a high hit on Boston forward Tommy Wingels in 2018, and a year later was suspended for five games after a cross-check to the head of Bruins forward Jake DeBrusk.