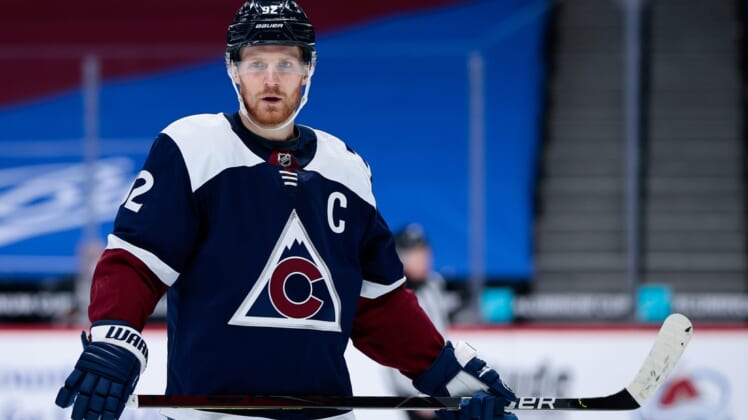 The Colorado Avalanche have played in outdoor games before but without much luck. They lost to the Detroit Red Wings at Coors Field in 2016 and last year fell to the Los Angeles Kings at the U.S. Air Force Academy.

Maybe playing outside of Colorado will be the answer for the Avalanche when they face the Vegas Golden Knights at the border of California and Nevada, in Stateline, Nev., on Saturday.

The game is part of the NHL Outdoors at Lake Tahoe, which features a rink located on the lakefront 18th fairway of the golf course at the Edgewood Tahoe Resort. The Boston Bruins and Philadelphia Flyers will play on the rink on Sunday.

Outdoor games have become a popular event for NHL fans, although with COVID-19 issues the stands won’t be filled with spectators. That doesn’t take away the specialness of the day, Colorado coach Jared Bednar said after the teams practiced Friday.

“There is something about our team and Vegas’ team getting out on the sheet of ice right here on the lake,” he said. “It is a beautiful setting. You’re standing on the ice looking right at the lake, right on the edge of it.

“It’s going to be quite the experience. Even without the fans I think it’s going to be something special. Our guys will be able to look back and say, ‘That was a real cool experience for our team.'”

What will make it even better for Bednar is he is expected to have a full lineup. Gabriel Landeskog and Sam Girard have been cleared from the COVID-19 list while Cale Makar and Matt Calvert are back from injuries.

Health and safety protocols forced postponement of four Avalanche games and after 12 days on pause they lost 1-0 to the Golden Knights on Sunday. Tuesday, they bounced back to beat Vegas on a goal in the final minute, 3-2.

After three days off the teams will face off again, this time in what is forecast as cloudy skies and temperatures in the mid-to-high 30s. The weather is a welcome change for many Knights players, many of whom played pond hockey growing up.

“It’s kind of where you learn your little tricks of the trade,” said Vegas captain Mark Stone, who said he played outdoors often when he was growing up around Winnipeg. “Just going out and messing around, not having a care in the world and just having fun.”

The Knights and Colorado are trying to stay in the top four of the West Division. Vegas is second and the Avalanche third, with the top four teams advancing to the playoffs after the 56-game regular season.

The Knights will have to shrug off the 3-2 loss at home. They rallied to tie it at 2-2 only to see Nazem Kadri score on a scramble in front of the net with 41 seconds left. It was an offensive explosion of sorts for Colorado after being shut out by Marc-Andre Fleury on Sunday.

Win or lose it will be a special day for both teams, though it took former Vegas and current Colorado forward Pierre-Edouard Bellemare a moment to realize the game would be near Lake Tahoe, not on it, during a press conference before the start of the season.

“Everybody made fun of me,” Bellemare said. “Sometimes you have to give a little bit of yourself for people to have a positive day. And I guess that was my gift this time.”