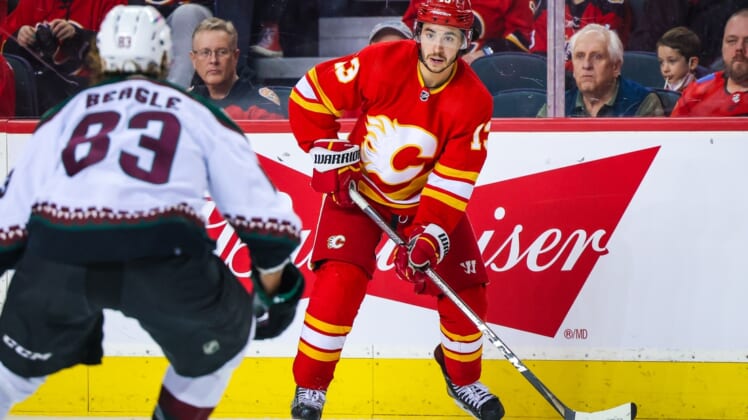 As much as their last outing was a measuring stick, simply because it was a Battle of Alberta clash, up next for the Calgary Flames is a true test of where their game is at as they march toward the Stanley Cup playoffs.

When the Central Division-leading Colorado Avalanche visit Calgary on Tuesday, it’s a chance for the Pacific Division-leading Flames to see how they stack up against the only team perched above them in the Western Conference.

“They’re a really good team, a fast team, so we’re excited to have them in our building,” Flames forward Dillon Dube said. “We know what we’re getting into, how good they are, so we need to be ready.”

This is the teams’ third meeting this month. Calgary took the first game 4-3 in overtime on March 5, only to see the Avalanche claim a 3-0 win eight days later. This is the first and only clash in the Saddledome.

The Flames are coming off Saturday’s 9-5 victory over the Edmonton Oilers, led by Johnny Gaudreau’s career-high five assists. Gaudreau, who was named the league’s second star of the week, is on the verge of setting career highs in goals and assists. Although Gaudreau is on pace to surpass the 100-point mark for the first time in his career, coach Darryl Sutter will point out Gaudreau’s defensive game is key to his return to the upper echelon of the scoring race.

“If you’ve got great hockey IQ, and checking is about having a good stick if you’re not 200 pounds and if you position yourself well, then why can’t you (defend)?” Sutter said. “He’s done that and he’s grabbed that.”

The Avalanche arrive after dropping a 3-2 overtime affair on the road against the Minnesota Wild on Sunday, a game in which they led 2-1 with 10 minutes remaining in regulation. Colorado has lost two of three, but isn’t fretting.

Case in point: The Avalanche outshot the Wild 42-29, with 28 of those shots in the first two periods, but were unable to put one past Minnesota goalie Cam Talbot until the final frame.

“I think we outplayed them most of the game,” forward Mikko Rantanen said. “We had a lot of chances in the first two (periods) that we didn’t capitalize.”

Colorado, which has a 10-point cushion on the Flames in the chase for top spot in the conference, has scored at least one power-play goal in seven straight games (9-for-21). That comes with the likes of Gabriel Landeskog (knee surgery), Ryan Murray (upper-body), Sam Girard (back) and Bo Byram out due to injury, plus forward Artturi Lehkonen not yet suiting up after being acquired at the trade deadline due to immigration issues.

With that many not playing, you would think coach Jared Bednar wouldn’t like to see top player Nathan McKinnon fighting Minnesota’s Mathew Dumba after the Wild defenseman delivered a hard mid-ice check on Rantanen. But Bednar understands it.

“You come to expect it. He’s a competitor,” Bednar said. “He didn’t like it. Clean hit, hard hit, but he jumps in, sticks up for his teammate. Come to expect that from him.”