Nine-time Australian Open champion Novak Djokovic is set to defend his title in Melbourne next month, at least according to the official tournament entry lists released Wednesday.

There has been speculation that the world No. 1 and 20-time Grand Slam singles winner might skip the season’s first major due to the Australian government’s vaccine mandate. The 34-year-old Serbian star has not publicly disclosed his vaccination status.

On the women’s side, the Jan. 17-30 tournament will go on without seven-time champion Serena Williams, who withdrew due to advice from her medical team.

“While this is never an easy decision to make, I am not where I need to be physically to compete,” she said in a statement. “Melbourne is one of my favorite cities to visit and I look forward to playing at the AO every year. I will miss seeing the fans, but am excited to return and compete at my highest level.” 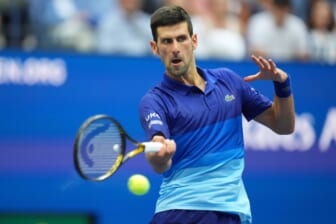 Williams, 40, has won 23 Grand Slam singles titles, one shy of the record held by Margaret Court.

World No. 1 Ashleigh Barty of Australia leads a women’s field that features all of the players in the top 40. That includes defending champion Naomi Osaka of Japan and reigning U.S. Open champion Emma Raducanu, 19, of England, who will make her Australian Open debut.

The men’s draw includes 49 of the world’s top 50 players, with 16th-ranked Roger Federer of Switzerland absent as he continues rehabilitation from knee surgery.

World No. 6 Rafael Nadal of Spain, who won his only Australian title in 2009, is in the field. His total of 20 Grand Slam titles is tied with Djokovic and Federer for the men’s record.