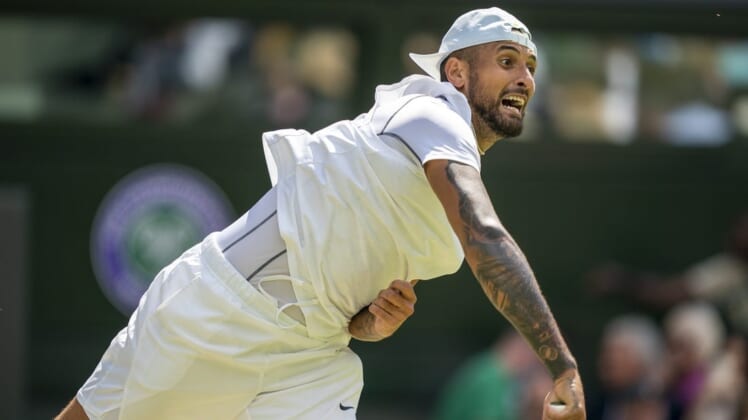 Australian Nick Kyrgios was charged with assaulting his ex-girlfriend in a 2021 incident and faces a court date next month.

Kyrgios advanced to the quarterfinals at Wimbledon and is scheduled to play Wednesday in London.

Kyrgios’ lawyer, Jason Moffett, said his client is aware of the charge but would have no further comment.

“It’s in the context of a domestic relationship,” Moffett told The Canberra Times.

Kyrgios, 27, has been the subject of ATP fines and fan criticism for a flammable temper and unpredictable demeanor on the court. But he’s in the quarterfinals of a Grand Slam for the third time in his career.

In his win over Stefanos Tsitsipas at Wimbledon on Sunday, Kyrgios was caught on courtside microphones asking the umpire, “Are you dumb?”

Tsitsipas said after the match Kyrgios’ bullying shouldn’t be tolerated.

“It’s constant bullying. That’s what he does. He bullies the opponents,” said Tsitsipas, who also lost to Kyrgios in Germany last month. “He was probably a bully at school himself. I don’t like bullies.”

The Times said Kyrgios has accumulated a total of about $540,000 in fines in his career, more than any other active player.