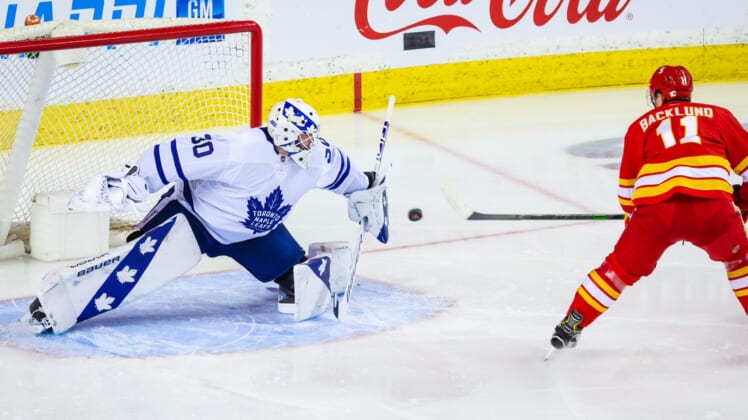 Auston Matthews scored twice, including the game-winning goal midway through the third period, to lead the visiting Toronto Maple Leafs to a 5-3 victory over the Calgary Flames on Monday.

Goaltender Jack Campbell made 26 saves for Toronto to tie a franchise record with nine consecutive wins to start a season.

Jason Spezza, Wayne Simmonds and John Tavares also scored and William Nylander notched two assists for Toronto, which is on a 7-0-1 roll that has solidified its spot atop the North Division. The Maple Leafs finish the season with an impressive 8-0-1 road record against the Alberta teams.

Mikael Backlund scored twice for struggling Flames. Andrew Mangiapane added a goal, and Elias Lindholm had two assists. Jacob Markstom stopped 25 shots in his 300th career game, but Calgary lost its fourth straight games and fell to 1-8-0 in the past nine. This defeat was as disappointing as any because the Flames drew even after trailing 2-0 and 3-2.

With the score tied 3-3, Matthews scored Toronto’s first power-play goal in 12 games — snapping a 0-for-29 swoon — with a rebound tally for his league-leading 27th of the season with 9:10 remaining in regulation.

Now at 185 career goals, Matthews moved past Jimmy Carson for the most goals in NHL history among U.S.-born players within their first five seasons.

Tavares capped a two-point game, which gives him 801 points in his career, with an insurance goal 80 seconds later that rounded out the scoring.

After a scoreless first period, Spezza opened the scoring early in the middle frame by converting his own rebound at 3:10. Matthews doubled the lead with his textbook wrist shot from the slot at 7:53 of the period.

Then came goals in waves. Mangiapane gave the hosts a boost when he buried a rebound with 1:54 remaining in the second period, and Backlund snapped an eight-game drought when he evened the count early in the third period.

Simmonds restored the Toronto lead at 7:13 of the final period by redirecting a long shot from his knees, but Backlund’s second of the game, a short-handed goal, tied the contest just past the midway point of the frame.

That set the stage for Matthews and Tavares to score the decisive goals.