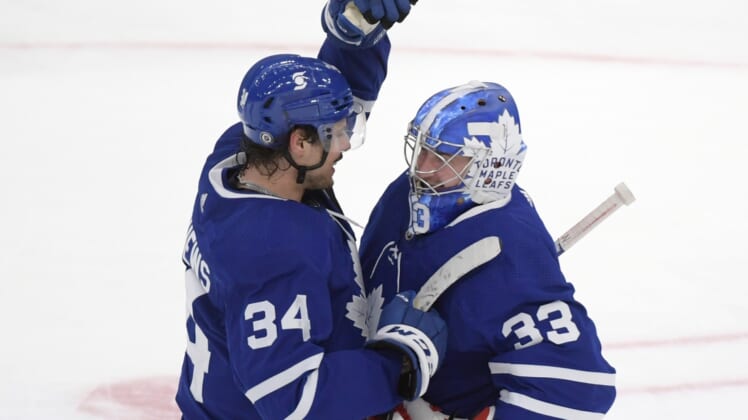 John Tavares and Mitch Marner both netted one goal and one assist and Auston Matthews became the league’s first player to reach the 40-goal mark as the host Toronto Maple Leafs used a four-goal first period en route to a 5-2 victory over the Montreal Canadiens on Thursday.

Alex Galchenyuk and Pierre Engvall also scored for the Maple Leafs (34-13-6, 74 points), who lead the North Division. Goaltender Jack Campbell made 20 saves in the win.

Cole Caufield and Artturi Lehkonen replied for the Canadiens (24-20-9, 57 points), who have lost two straight but still hold fourth place in the division. Goalie Cayden Primeau was hooked after surrendering four goals on 15 shots in the first period. Jake Allen stopped 19 shots in relief.

Toronto has won six of nine meetings between the teams this season, with the final clash coming Saturday.

The Maple Leafs, who had a five-game winning streak snapped in an overtime loss to Montreal on Monday, took the lead 16 seconds into the game when Galchenyuk opened the scoring on the game’s first shot. Thanks to his team’s forecheck, Galchenyuk gained the puck in the high slot and wired a backhand shot for his second goal in three games.

Marner’s 19th tally of the season from a nifty break with 2:39 remaining in the period capped the dominating opening frame.

The Canadiens, who saw a three-game winning streak snapped Wednesday in Ottawa, got on the board when Caufield netted his third goal in just his seventh NHL game, at 13:30 of the middle period. Then, Lehkonen made it a 4-2 game early in the third period by cashing in a rebound after Tyler Toffoli’s shot was stopped. It was Lehkonen’s sixth goal of the season.

Matthews restored the three-goal lead with less than five minutes remaining – and became the first player to score 40 goals this season.

The game was a double disappointment for the Canadiens, as forward Phil Danault left with an undisclosed injury after tangling with teammate Corey Perry.