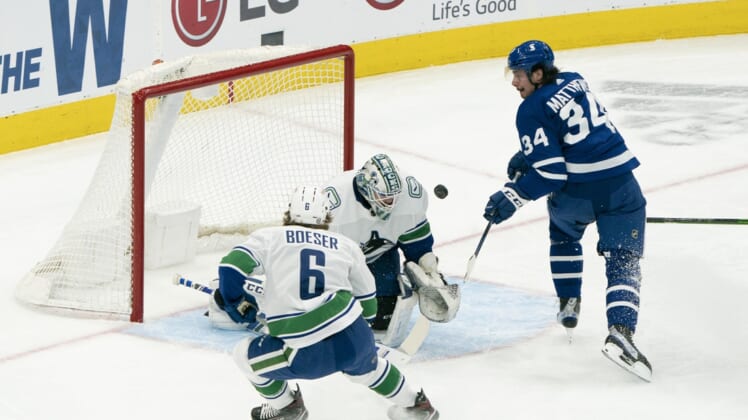 Auston Matthews scored twice to give him a league-leading 38 goals on the season and the Toronto Maple Leafs defeated the visiting Vancouver Canucks 5-1 on Saturday night.

Adam Brooks, Alex Galchenyuk and Joe Thornton also scored for the Maple Leafs, who swept the two-game set with the Canucks and extended their winning streak to five games, one shy of their season high. Mitchell Marner added two assists for Toronto.

Toronto completed the season series with Vancouver at 5-3-1.

Tanner Pearson scored for the Canucks, who have lost four in a row, having scored only one goal in three of those defeats.

Jack Campbell made 26 saves for Toronto and Thatcher Demko stopped 25 shots for Vancouver.

The Canucks scored at 13:28 of the first period after Bo Horvat won a faceoff in the Toronto zone. Quinn Hughes sent the puck to Pearson, whose shot from the right boards went in off the post and in for his 10th goal.

Matthews tied the game less than two minutes later on a wrist shot from the left circle that hit the post before going in. Marner, who had carried the puck into the Canucks’ zone to set up the sequence, made the final pass. Nick Foligno also earned an assist.

Vancouver led 11-6 in shots on goal after one period.

Matthews gave Toronto the lead with his 38th goal of the season at 3:50 of the second period with a quick shot from the right circle. Marner made the pass from the corner after a Vancouver turnover.

Despite trailing, Vancouver led 23-16 in shots on goal after two periods.

Brooks deflected Justin Holl’s slap shot from the right point at 4:55 of the third period for his fourth goal of the season.

Galchenyuk scored his fourth goal of the season on a rebound at 11:39 of the third.

Thornton finished the scoring by tallying into an empty net, his fifth goal of the season, at 18:00 of the third.

Before the game, the Canucks placed right winger Jake Virtanen on leave pending an investigation into allegations of sexual misconduct.

The Canucks also were without center Tyler Motte (undisclosed injury).