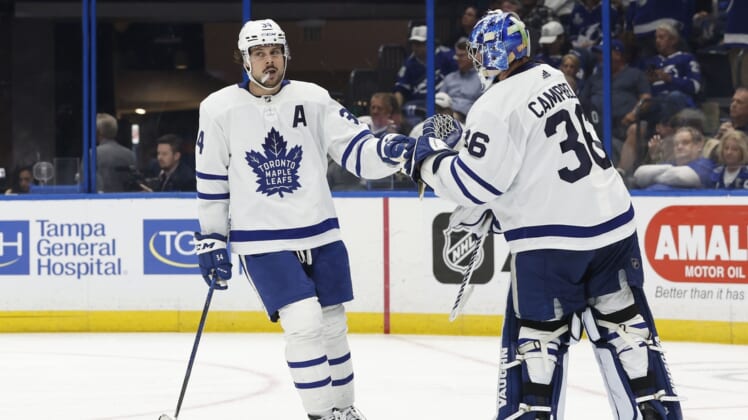 Matthews scored twice in the second period and once in the third to match Rick Vaive’s goal-scoring mark from the 1981-82 season.

Mitchell Marner had a goal and three assists to stretch his point streak to 10 games (six goals, 17 assists).

Both Matthews (assist) and Marner produced four-point outings for Toronto (45-19-5, 95 points), which won its fifth straight game and broke a tie with Tampa Bay (43-19-7, 93 points) for second place in the Atlantic Division.

Nikita Kucherov and Jan Rutta scored for the Lightning, who lost their second straight (0-1-1) and played their third game in four nights.

In a possible first-round playoff preview, Toronto struck 1:59 into the game after defenseman Zach Bogosian’s attempt to keep the puck in the Lightning offensive zone was blocked by David Kampf.

He flipped a pass to Engvall, and the right wing raced in and ripped his 13th goal of the season past Vasilevskiy on the visitors’ first shot.

However, Stamkos won a faceoff with Matthews, and Kucherov immediately fired home his 13th marker at 6:24 to tie the game at 1.

In the second period, Matthews took a pass from Bunting, skated in and snapped a shot from inside the left circle at 1:46 for a 2-1 lead.

The tally marked Matthews’ sixth straight game with a goal and extended his point streak to his past 13 games played.

Following Rutta’s backhanded goal that broke his 49-game goalless drought dating back to Nov. 20, Matthews chipped in marker No. 53 for a 3-2 lead at 9:57.

Kerfoot’s 12th tally from in tight less than three minutes later pushed the lead to 4-2.

Matthews’ hat-trick goal and Marner’s 29th on a feed from Matthews in the final period rounded out the scoring.