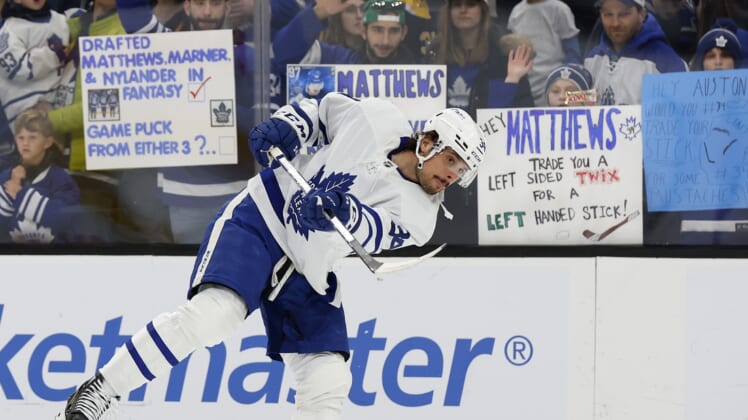 Auston Matthews will be out to become the fourth Toronto player with a 50-goal season in franchise history when the Maple Leafs play the visiting Winnipeg Jets on Thursday.

Matthews scored his 49th of the season Tuesday in Toronto’s 6-4 road victory over the Boston Bruins.

“It’s not really something I really think about,” Matthews said before the game in Boston. “Honestly, I just try to take it day by day. That kind of stuff has a way of working itself out.”

Matthews’ power-play goal in the second period on Tuesday gave Toronto a 5-1 lead.

The Jets, who will be without Kyle Connor and Nate Schmidt for the second straight game on Thursday, defeated the host Buffalo Sabres 3-2 in a shootout on Wednesday. Connor, the team leader in goals (41) and points (82), and offensive defenseman Schmidt are out for at least three games after they tested positive for COVID-19.

“Eventually, it was going to catch up,” Jets interim coach Dave Lowry said. “Unfortunately, it happened to us today.”

Connor had played in all 67 games this season until Wednesday, and he has career bests in goals and assists (41).

“We’ve had other top guys out,” Lowry said. “Yes, you’re disappointed that he’s not going to be able to play, but somebody else will have to step up and what it does now is it creates an opportunity for someone else to come in and take advantage.”

The Jets overcame the absences at Buffalo as Blake Wheeler scored in regulation and had the decisive goal in the shootout. Connor Hellebuyck made 35 saves for the victory.

The Maple Leafs are coming off a convincing win against an old nemesis in Boston, but it came at a cost. Goaltender Petr Mrazek sustained a groin injury early in the first period and was replaced by Erik Kallgren, who allowed three goals on 26 shots.

“It’s tough,” Maple Leafs coach Sheldon Keefe said. “Petr has been getting some traction and had been playing well. We don’t know the severity of (the injury). We will get a greater sense of what the situation is in the coming days, but it looks like he is going to miss some time.”

No. 1 goaltender Jack Campbell is close to returning from a rib injury.

Toronto also lost two defensemen in the second period. Justin Holl was hit on the head with a shot in the second period and left the ice bleeding. Ilya Lyubushkin exited the game after being punched by Taylor Hall, who had been crunched into the side boards. Hall received a roughing minor and on Wednesday was fined $5,000.

The Maple Leafs played with four defensemen for the remainder of the game.

“It’s doable, in terms of the workload and conditioning side of it,” Toronto defenseman Morgan Rielly said. “You have to take shorter shifts and it’s a bit harder with structure because you have to be thinking about it a lot. You’re kind of hyper aware if you’re trapped in your own zone. I think we iced the puck more in the third than we would have liked, but I thought we did a good job of it (Tuesday).”