Auston Matthews back as Maple Leafs take on Predators 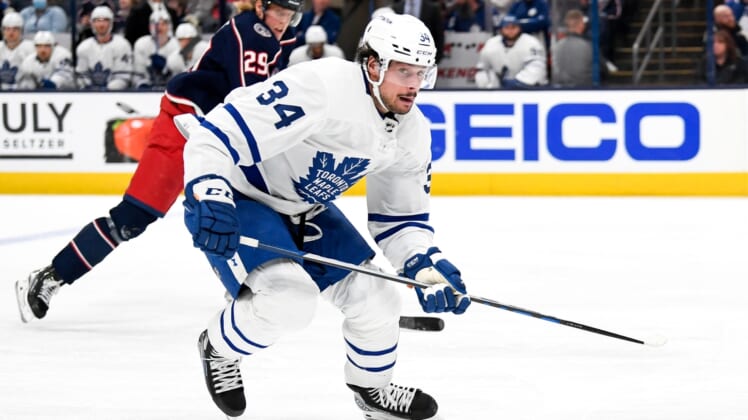 League-leading goal scorer Auston Matthews will return from suspension Saturday night against the host Nashville Predators and the Toronto Maple Leafs hope to continue the success they had without him.

Matthews was banned for two games for a cross-checking incident against the Buffalo Sabres on Sunday, and Toronto won both of them behind stellar goaltending from rookie Erik Kallgren.

“I made a mistake and I recognize that it deserves some sort of punishment,” Matthews said on Friday. “I just thought two games was a lot.”

Kallgren, who shut out the Dallas Stars on Tuesday in his first NHL start, stopped 34 shots Thursday in a 3-2 victory over the visiting Carolina Hurricanes. He made 35 saves against Dallas.

“I think I let go some bad rebounds (Thursday),” Kallgren said. “Other than that, pretty similar (to Tuesday).”

“Another great game by Kallgren in net, just coming in calm, collected and making a lot of big saves for us,” said Mitchell Marner, who scored his 24th goal of the season. “When guys go out of the lineup, we know guys have to step up and take a bigger role on and I think especially that (David) Kampf line has done a great job doing it.”

“He is keeping his emotions in check,” Keefe said. “I’m sure, or at least I hope, that he is enjoying this. He certainly should be. At the same time, there is a professionalism and business-like attitude that is keeping him working.”

The 25-year-old made his NHL debut in the 5-4 overtime loss to the Arizona Coyotes on March 10 with 30 minutes in relief of struggling Petr Mrazek. No. 1 goaltender Jack Campbell, who has also been having difficulties, is out with a rib injury.

Nashville will be out to atone for a 5-4 loss to the Philadelphia Flyers on Thursday.

Predators coach John Hynes said the team’s performance at Philadelphia “wasn’t at the standard that we need to play with.”

“We have an identity and a commitment level that we need to play with,” Hynes said. “We talk about icing the game that gives us the best chance to win regardless of who we play, and we weren’t at that level tonight.”

“Honestly, I think we got what we deserved,” said defenseman Roman Josi, who had three assists to set a club record of 55 for a season. “The first two periods weren’t good, and they outplayed us.”

Nashville grabbed the lead in the third period when Filip Forsberg scored his 32nd goal of the season to tie David Legwand’s franchise-record of 210 career goals.

“That was an unreal goal,” Josi said. “It was one of those goals that only Fil can score — between the legs, so quick in front of the net, and there wasn’t a lot of space. He’s been unbelievable for us all year. He’s scoring so many important goals. He’s such an amazing goal scorer, and his shot is unbelievable.

“It’s definitely something he can be really proud of, tying that scoring record.”

Philadelphia, however, won with two tallies in the final five minutes.