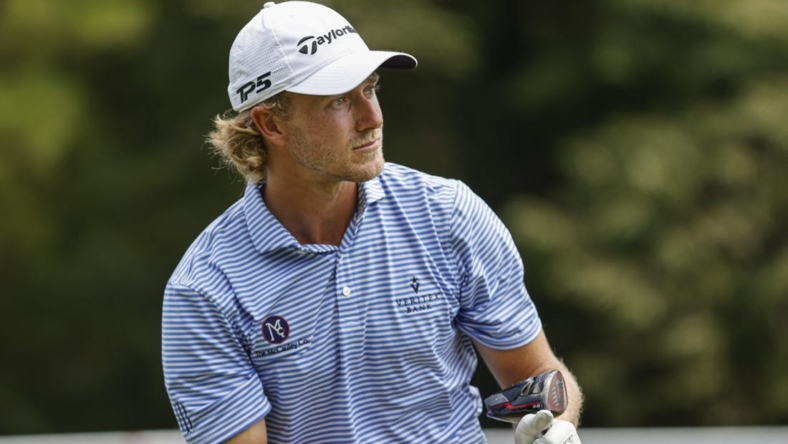 Austin Smotherman and Australia’s Harrison Endycott shot 9-under-par rounds of 62 to share the early lead at the Butterfield Bermuda Championship on Thursday in Southampton, Bermuda.

It marked a career-low round of the PGA Tour for both golfers, and it’s the first time either player has held the lead after a round.

Smotherman rolled in nine birdies and avoided making a bogey, while Endycott benefited from two eagles at Port Royal Golf Course. They held a one-stroke advantage over Arjun Atwal of India, Adam Schenk, Scott Brown, Denny McCarthy and Robby Shelton at 8-under 63.

Smotherman was part of one of the earliest groups to begin their round and started his day off with a bang. He birdied four straight holes starting at the par-4 fourth en route to a 6-under 30 on his front nine.

“Ball control into the greens (was) great with the wedges,” Smotherman said. “I mean, all my birdie putts were — longest one I made was maybe 12, 13 feet. Keeping it in the fairway, hitting wedges close and then followed that up with taking care of the par 5s, getting there in two and some long two-putts.”

Ranked No. 303 in the world, Smotherman is on track to begin the new season with four straight made cuts.

Endycott, a Tour rookie, began his round on the back nine and opened with two bogeys. He came back with four straight birdies and made his first eagle on the par-5 17th, later adding three birdies and an eagle (par-5 seventh) over his final five holes.

“Had a slow start, started bogey, bogey. I said to Dave, my caddie, I said I think it’s time to get on a bit of a heater now,” Endycott said. “It was great, I can’t remember the last time I had a couple eagles, two in a round, and I just hit some really good quality shots out there.

“You know, obviously I don’t think we’re going to get too many rounds this week where there’s no wind, but yeah, look, just take it day by day and looking forward to getting at it tomorrow morning.”

Schenk, Brown and Shelton carded bogey-free rounds among the group tied for third.

Amateur Aaron Jarvis of the Cayman Islands shot a 4-under 67 featuring an eagle at No. 17. Amateur Jarryd Dillas led the four players in the field from Bermuda with a 2-under 69.

Playing on a sponsor exemption, John Daly shot an even-par 71.