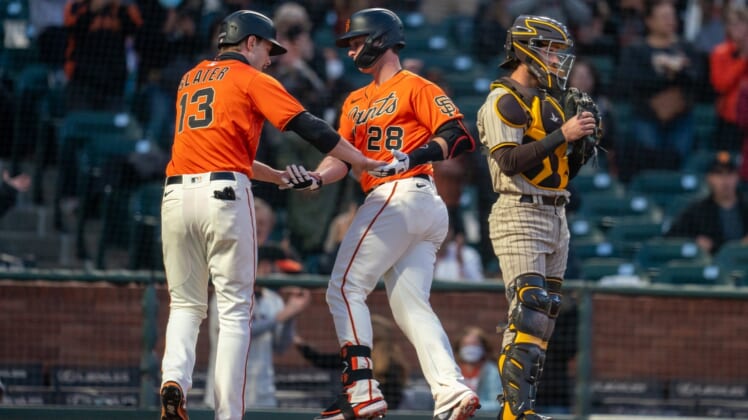 Austin Slater belted an opposite-field homer to open the bottom of the seventh Friday night to break a 4-4 tie and give the San Francisco Giants a 5-4 victory over the San Diego Padres in an early-season battle for first place in the National League West.

The home run, off right-handed Padres reliever Keone Kela, was Slater’s third of the season and gave reliever Camilo Doval (1-1) his first major league win. Left-hander Jake McGee picked up his eighth save by striking out the side after issuing a lead-off walk in the ninth.

Kela, who departed the game two pitches after the Slater homer with an unspecified injury, fell to 2-2.

The Giants turned the wildness of Padres starter Blake Snell into a 4-0 lead, but the Padres tied the game in the top of the sixth on two-run homers by Trent Grisham and Eric Hosmer.

Snell allowed only hit. But he issued six walks and three of those scored.

Snell’s problems began when he walked Giants starting pitcher Anthony DeSclafani leading off the third. Although DeSclafani was forced at second, the Padres couldn’t turn the double play and one out later, Buster Posey hit an opposite-field, two-run homer to right.

In the fifth, Snell walked Slater and Posey and was relieved by Austin Adams with two on and two out. Adams hit pinch-hitter Mike Yastrzemski, who came off the injured list Friday, to load the bases and Evan Longoria followed with a two-run single.

DeSclafani had allowed only one hit through five innings but couldn’t get out of the sixth. Jorge Mateo opened the inning with a single off third baseman Longoria’s glove and Grisham followed with a drive that cleared the fence in center. After Manny Machado doubled, left-hander Sam Selman replaced DeSclafani and immediately gave up a Hosmer shot to center.