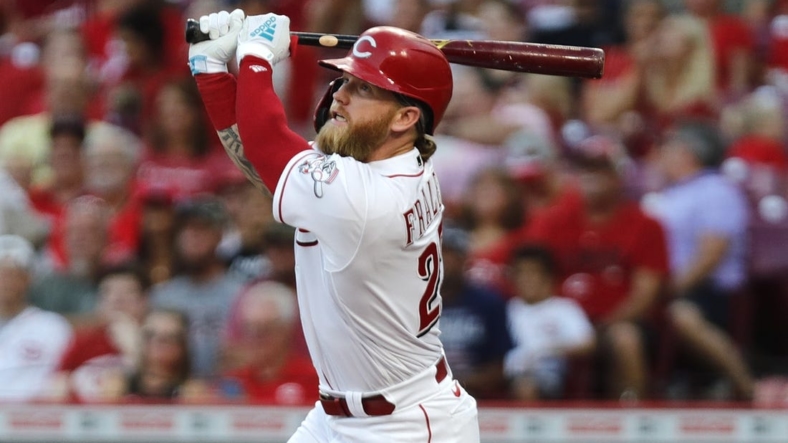 Alejo Lopez matched a career high with three hits and Austin Romine connected for a go-ahead two-run homer as the Cincinnati Reds bounced back from a Monday blowout to beat the visiting St. Louis Cardinals 5-1 on Tuesday night.

Right-hander Derek Law (1-0), making his Cincinnati debut after being promoted from Triple-A Louisville earlier in the day, earned the win with two scoreless innings, allowing one hit and striking out one. It was Law’s first MLB win since throwing a scoreless inning of relief for Toronto at Baltimore in an 8-5 win on Sept. 17, 2019.

The top three batters in the Cincinnati lineup combined for six hits and three runs scored.

Cincinnati starter Justin Dunn appeared in line for his second win in three starts and his second straight quality start before being surprisingly pulled after allowing just three hits and one run over four strong innings.

The only run allowed by Dunn was a solo homer by No. 9 hitter Tommy Edman, his 11th of the season that traveled an estimated 423-feet, two-thirds of the way up the sun deck in right field, giving St. Louis a 1-0 lead in the third inning.

But the Reds immediately responded in the bottom of the third off St. Louis starter and loser Dakota Hudson (7-7), tagging the right-hander for four runs, including a two-run go-ahead homer from No. 9 hitter Romine, his second of the season since coming over from the Los Angeles Angels.

Jonathan India followed with a single to center, extending his hitting streak to a career-high 12 games. The 12-game streak is also the longest this season by a Reds player. Jake Fraley followed with an RBI double and Kyle Farmer singled to right to close out a string of five straight hits in the four-run outburst.

The Reds added another run in the fifth off Hudson when they loaded the bases with none out and scored on a double play groundout by Donovan Solano.

The Reds defeated the Cardinals for just the fifth time in 13 tries this season while the red-hot Cardinals lost for just seventh time in 28 games in August.